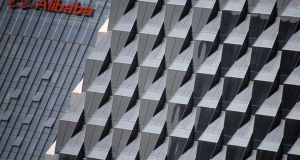 Alibaba’s stock is up more than 81 per cent this year. Photograph: Reuters

Thursday’s results show that Alibaba Group Holding, one of Asia’s most valuable companies, continues to derive the lion’s share of its revenue from e-commerce, despite strong growth in its entertainment and cloud businesses.

Sales on the company’s e-commerce platforms made up 86 per cent of revenue in the three months to June 30th, up from 73 per cent a year prior.

Alibaba’s stock is up more than 81 per cent this year, buoyed by company predictions of strong full-year revenue growth of between 45 and 49 per cent.

In June, Alibaba invested a further $1 billion in Singapore-based e-commerce platform Lazada Group. It has also targeted new merchants in Russia and the United States as part of a wider plan to boost revenues and attract new customers outside China.

During a call with analysts on Thursday, executives said the firm expects a more meaningful contribution from offline initiatives as part of its so-called “new retail” strategy.

Alibaba, though, has yet to prove the value of several recent large-scale offline investments, according to analysts, including a $2.6 billion infusion into department store chain Intime Retail Group.

“At least for now we don’t see any full integration between offline and online (technology) and that’s a problem,” said Pacific Epoch, senior analyst Steven Zhu.

“If you don’t have full integration then new retail remains a concept rather than reality.”

In the cloud business, revenue grew by 96 per cent in the quarter to 2.4 billion yuan, with paying customers breaking the 1 million mark for the first time, up from 577,000 a year earlier.

Alibaba’s cloud business boosted its global data centres to 17 during the first quarter, with the addition of two centres in India and Indonesia.

Revenue in the entertainment business rose by 30 per cent to 4 billion yuan.

Net income attributable to the company’s shareholders nearly doubled to $2.17 billion, or 83 cents per share.

Shares of Chinese e-commerce firms, including Alibaba.com and JD.com Inc, have outperformed the market in 2017, buoyed by positive revenue growth around June sales events and overseas expansion.