Dixons Carphone shares suffer biggest fall in over a year 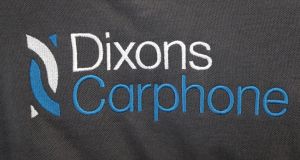 Dixons Carphone had its biggest drop in more than a year after the consumer electronics seller was doubly downgraded by one of the top followers of the stock.

The shares fell as much as 8.8 per cent, the most since June 2016, as Exane BNP Paribas’s Simon Bowler cut his opinion to underperform from outperform, citing adverse developments in the mobile phone market.

Mr Bowler is ranked second by Bloomberg among 18 analysts who cover the stock, based on the relative returns of his recommendations over the past year, and becomes the only one to have given Dixons Carphone stock a negative rating.

The downgrade deals a new blow to the shares, which already were trading at three-year lows on concern over a broad decline in UK consumer spending. Mr Bowler is most worried by changes in the mobile market including a reduction in the number of customers upgrading to new phones and an unbundling of handset and network contracts.

The analyst also has concerns around the quality of the retailer’s earnings, estimating that full-year results included a £50 million contribution from changes in revenue recognition around insurance and warranty sales. Without that, UK profit would have been down 10 to 15 per cent, compared with the stable earnings that Dixons Carphone reported, he said.

Taking account of benefits from the 2014 merger of mobile phone and consumer electronics retailers that created the company, the underlying drop “is arguably closer to 15-20 per cent”, he said.

1 ‘I’m so lucky to be in the Caribbean – a million miles from Derry Girls’
2 Michael Smurfit: ‘I asked Trump to invite me to the White House for my 80th birthday’
3 Tobacco makers still trying to make a mint from Irish menthol market
4 Ryanair expects air fares to fall when flights take off again
5 ‘The recovery needs to be a full-scale economic renewal’
6 Small businesses are cannon fodder in zealous anti-virus experiment
7 Ireland stands to benefit in a big way from investing in public transport
8 Brexit, coronavirus and bark beetle pose challenges for Coillte
9 Minister calls on EU to act against tobacco firms ‘undermining’ menthol ban in Ireland
10 ‘Never mind GDP; the most fundamental job of any leader is to keep his people alive’
Real news has value SUBSCRIBE