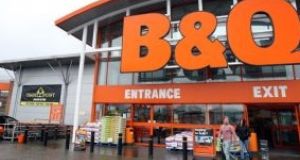 B&Q was the main disappointment. Its like-for-like sales fell 4.7 per cent versus expectations for a 3 per cent fall

Kingfisher, which operates eight B&Q stores in Ireland, reported worse than expected quarterly sales at its British business due to a drop in demand for garden furniture and other summer products, denting the group’s share price.

The company was cautious about the second-half economic outlook for Britain and France, but said it was comfortable with average analysts’ forecasts for underlying earnings per share of 26 pence for full-year 2017/18, versus 25.9 pence in 2016/17.

The stock, already down 12 per cent this year, fell as much as 6 per cent on Thursday and was the biggest faller in the blue chip FTSE 100 index.

“While valuation is not demanding, [the] short-term risk of further downgrades remains high given the scale [and] complexity of transformation,” said Investec analyst Kate Calvert, who has a “sell” rating on the stock.

Kingfisher is in the second year of a plan to boost annual profit by £500 million from 2021. The plan, costing £800 million over five years to deliver, includes unifying product ranges and improving e-commerce capabilities.

The drop reflected a 10.7 per cent dip in sales of seasonal goods after a first quarter rise of 17 per cent that was boosted by better weather. The second quarter last year was also strong, making comparatives tough. Like-for-like sales at

Kingfisher’s Screwfix outlet rose 10.8 per cent. “B&Q’s performance was impacted by seasonal swings across Q1 and Q2. We have also continued to experience some disruption across the businesses, although on an improving trend,” said chief executive Veronique Laury.

“Having been very aware that this year would be challenging given the step up in transformation activity, we already have self-help plans in place to support our overall Year 2 performance,” she said in reference to cost savings.

British retail sales slowed in July, as shoppers reduced purchases of most things other than food, adding to worries about falling consumer demand, official data showed on Thursday.

Kingfisher’s main British rival, Homebase, owned by Wesfarmers unit Bunnings, reported a £4 million loss for the year to June 30th on Thursday and a 4.3 per cent fall in fourth quarter same store sales. It said the poor performance would continue in the short term as Bunnings restructured the business.