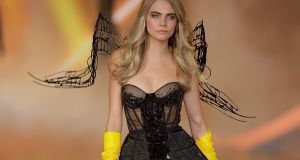 Sales at Victoria’s Secret fell more than projected last quarter, highlighting the trouble it has had connecting with younger customers.

L Brands Inc. tumbled as much as 10 percent in late trading after disappointing investors with its profit forecast, a sign that the company’s comeback is still a ways off.

Earnings will be 25 cents to 30 cents in the third quarter, the owner of Victoria’s Secret and Bath and Body Works said. Analysts had been looking for 36 cents on average.

Sales at Victoria’s Secret also fell more than projected last quarter.The outlook underscores the troubles Victoria’s Secret has had connecting with younger customers. Shoppers have been shifting toward cheaper, less-supportive lingerie like bralettes - a category where the company faces competition from American Eagle Outfitter’s Aerie brand and e-commerce players. On top of that, consumers are skipping trips to the mall, and many are spending more money on travel and technology than apparel.

Total sales by that measure fell 8 percent, compared with an estimated decline of 7 per cent. One bright spot: Bath and Body Works grew faster than expected in the period. Still, that division only accounts for about 30 per cent of revenue.

The shares fell as low as $35.45 in extended trading. Even before the drop, the stock was down 40 per cent this year.

Tourism needs to shift to ‘a more ethical model’ 05:35
Covid taking a toll on companies’ reservoir of workplace knowledge 05:30
Randox to open Covid testing lab in Co Donegal 05:30
Remote working works but there will be a price to pay 05:27
John FitzGerald: Brexit deal could let North leverage position 05:19