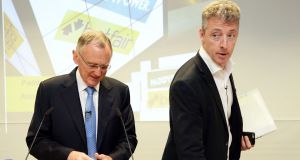 Nothing scares investors like uncertainty. That won’t be news for corporate heavyweights like Paddy Power Betfair chairman Gary McGann, but it didn’t save him from a turbulent weekend as he dealt with the fallout from the leaked news that chief executive Breon Corcoran was stepping down.

A hurried statement to the London Stock Exchange on bank holiday Monday morning was notable as much for the rare advance reporting of elements of the company’s results as it was for confirmation of Corcoran’s departure.

The sense was of a company desperately trying to stem the flow of negative sentiment among shocked investors. If that was the intent; it didn’t work. Shares fell more than 8 per cent at one stage. The only crumb of comfort for investors was the news that the company had actually appointed a successor.

First, corporate leaks on such sensitive issues are never good news, and the company will want to know where the weakness lies.

Second, the inability of the group to give any clear guidance on a timeframe for the transition only exacerbates the feeling that the board is not yet fully in control of the situation.

But, most fundamentally, it needs to win back investor trust. Corcoran has been a dynamic and ambitious executive over many years. He was earmarked as a future chief executive long before he left Paddy Power to lead Betfair.

The fact that he was a known entity and the desire to bring him back into the fold were among the drivers behind the merger of the two groups. And once conjoined, it was he rather than Paddy Power CEO Andy McCue who was appointed to the top job.

Consensus has it that he was the right man to shape the future of the enlarged company a little over a year ago. The bland assertion that he is weary of the business fails to convince. The board owes its shareholders a fuller explanation than that.

Challenges lie ahead for Paddy Power Betfair, both in completing the shaping of the merged entity and in adapting to an ever tightening regulatory environment. As of now the group faces those with a CEO who has at least one foot out the door.

It’s hard to blame investors for being nervous.