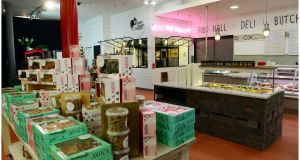 US catering services giant Aramark’s Irish unit posted almost 31 per cent profit growth in its last financial year, boosted by the impact of its more-expensive-than-reported €60 million acquisition of Avoca Handweavers.

The group, which entered the Irish market with the 2004 purchase of Campbell Catering, delivered €45.8 million of gross profit for the year to the end of September 2016 at Aramark Ireland Holdings, up from €35.1 million for the previous year, according to accounts filed with the Companies Registration Office.

Group turnover rose at a similar pace, by 30.4 per cent to €310.1 million, according to the figures.

While the Avoca deal contributed €43 million of sales for the almost nine months in which it was under the control of Aramark Ireland, its contribution to the group’s €2 million net profit was €225,000 for the financial year.

While Aramark’s purchase of Avoca from the Pratt family last year was previously through to be for in excess of €50 million, the accounts show that the figure was actually €59.9 million. The company has recorded €33.7 million of goodwill associated with the purchase of Avoca, which was founded in the 1970s as a textiles business.

Aramark is believed to have beaten off competition from others, including Dunnes Stores, to buy Avoca

Since Aramark took control of Avoca it has sold some of the company’s textiles operation in Co Wicklow back to members of the Pratt family.

Meanwhile, documents lodged in late June with the Companies Registration Office containing the last set of accounts for Avoca to January 2016 revealed that the food and lifestyle luxuries retailer racked up more than €4 million in restructuring and related costs ahead of the Aramark deal.

The group was among the most advanced parties involved in the bidding in 2008 for Noonan Services, the Irish facilities management and contract cleaning company, but was beaten by a €90 million off from UK private equity firm Alchemy Partners.

Last week an agreement was reached for Noonan Services to change control for the second time in a decade. South African conglomerate BidVest is set to take over the business in the coming months in a €175 million deal.

While there had been speculation in industry circles that Aramark was among bidders vying for Noonan Services , several sources with knowledge of the transaction told The Irish Times in June that it was not among the final bidders.

1 State may face €1bn in compensation in Covid-19 case, Press Up claims
2 How I managed to cut my mobile phone bill by at least a half
3 Fiona Reddan: Who’s afraid of Revolut? Not AIB and BOI it seems
4 Lahinch Golf Club runs out of its own cash after €3m Covid-19 hit
5 ECB ‘should wipe Covid crisis debt’ to help nations recover
6 Is Coveney the right man to lead Greencore out of Covid-19 crisis?
7 Son putting elderly dad under pressure to sign over land
8 Salesforce in talks to buy Slack in huge cloud software deal
9 Ireland must beware as digital tax reform enters critical phase
10 Workhuman predicts double-digit revenue growth for 2020
Real news has value SUBSCRIBE