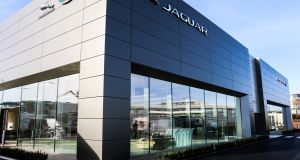 One of the new additions: Joe Duffy’s new Jaguar Land Rover outlet in Airside, Swords. The new facility is located on the premises formerly operated by Bill Cullen.

Profits at one of Ireland’s largest motor dealers, the Joe Duffy Group, jumped 13 per cent last year as it expanded its operations and network of outlets.

The group currently comprises 11 separate car franchises, along with commercial vehicle operations for Ford and Volkswagen, and BMW’s i sub-brand and its motorcycles. It currently operates these from 12 separate locations and is in the midst of a €25 million expansion plan.

During 2016, it added a third Volkswagen outlet to its operations with the purchase on February 5th last year of Karmann Auto Ltd for €1.8 million in cash. The outlet has last year contributed sales of €15.4 million and €167,184 in profits to the group’s figures.

Speaking to The Irish Times, group chief executive Gavin Hydes said: “We are quite clear we have a strategy to grow the group and have announced a €25 million capital investment plan.

“Despite the fall in the new car market, we are confident that our robust business model will deliver another strong performance for 2017. We are in growth mode.”

Mr Hydes said the recent negative publicity surrounding diesel was having an impact on the market, but only so far as buyers are reconsidering petrol cars again. On electric car sales he said there is still not a clear Government strategy on incentives and there is a lot of work still to be done in this area.

Weaker sterling has led to a significant rise in the number of used imports so far this year, up 41 per ent to 51,120. However, Mr Hydes said that part of this is due to an undersupply of used cars locally.

“You have a total car park of 2.2 million and, after several years where new car sales were 80,000 or so, the supply was below the natural replacement. So there is naturally going to be imports.” He says a lot of the imports are being done by car dealers.

In relation to any changes in the upcoming Budget, he expects the Government to take a cautious approach. “If you look to the changes made back in 2008, they had a huge impact on buyer choices and the tax take and I think it’s well documented that for every car that’s sold, the average tax take is €9,000.”

On Brexit, Mr Hydes said: “A lot of our customers are involved in industries linked to exports and if it affects them then it affects our business. We’ve got a strong resilient business model and we have been in a market before which suffered a big fall off in sales. Throughout that we’ve managed to grow so we’ve got an experienced team. If it hurts we’ll be strong enough to be resilient.”

The group recently secured planning permission for three further facilities at Junction 5 of the M50 at Charlestown, in Finglas. These will accommodate three new dealer operations: VW North Dublin, Porsche, and a third operation.

Mr Hydes said the company has yet to decide on which franchise will operate from the third outlet. “We’re not in any rush, but we wanted to make sure we utilise the full site,” he said.

Outside Dublin, the group is due to commence building work later this year at a its new Audi Limerick terminal at Ballysimon Road. The new premises is due to open in 2018.

There were six directors for the firm, and as part of a restructuring of the shareholding the accounts show Mr Hydes increased his percentage of ordinary shareholding to 62 per cent.