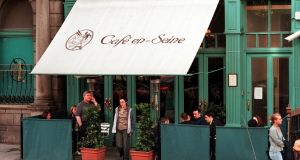 Operating profits at the Mercantile Group, which owns a number of well-known Dublin restaurants and bars, decreased by 84 per cent to €95,058 in 2017.

The entertainment group – which owns a number of venues around Dublin including Café en Seine, Whelans, The George, Pichet and the Mercantile Hotel – sustained the drop in operating profits in spite of revenues climbing by 4 per cent from €28.73 million to €29.7 million in the 12 months to the end of December 2017.

The group’s operating profit decreased after the business incurred exceptional costs of €3.1 million.

The costs include €1.6 million for a provision against related debt; other costs of €350,889; closure costs of businesses going under renovation totalling €568,590 and legal and professional fees of €542,476.

A significant proportion of the legal fees is likely to relate to the business’s successful resolution of a dispute with former shareholder Frank Gleeson after several days of mediation in May, 2017.

The falling out between the parties had spawned three separate legal actions.

According to the directors’ report, “2017 was an important year of growth and development for the group which delivered an increased trading profit (Ebidta, earnings before interest tax, depreciation and amortisation) of €5.1 million (pre-exceptional costs) as compared to €3.1 million in 2016”.

The group, owned by Maurice Regan and the Breslin family, is in the process of a €30 million capital expenditure programme including a recent €4 million refurbishment of Café en Seine.

During 2017 it invested €6 million in the refurbishment of Nolita on George’s Street and Opium on Wexford Street. It also spent €7.5 million on the acquisition of Dame House, which is adjacent to the Mercantile Hotel and Bar, where the group is planning to treble the number of rooms to about 100.

“2017 was a busy year for the group and we have been very pleased with the performance of Nolita and Opium since they reopened. Trading performance for 2018 is ahead of the previous year, as we continue to invest in our properties, most recently with the reopening of the stunning new look Café en Seine on Dawson Street, ” the group said.

The directors said that the group intends to expand its locations as acquisition and redevelopment opportunities arise.

The book value of the group’s tangible assets was €48.5 million.

Shareholder funds at the end of December totalled €16.89 million that included cash of €2.9 million. Staff costs in 2017 totalled €8.7 million.

Only way is up for Stripe as valuation skyrockets 05:53
Is RTÉ board tuning out from digital expertise? 05:40
Kinzen raises $2.2m as it helps clients fight ‘misinformation’ 05:30
Musk’s money, Santa’s immunity and Blinken’s Brexit analogy 04:59
Direct sea routes to Europe offer certainty in choppy Brexit waters 01:00