Troubled retailer collapsed after Christmas, but deal will save almost 1,500 jobs 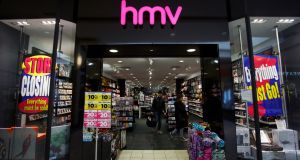 HMV, the British music retailer that collapsed after Christmas, has been sold to the owner of Canada’s Sunrise Records in a deal that will save 100 stores and 1,487 jobs, its joint administrators said on Tuesday.

Sunrise Records chief executive Doug Putman said he was delighted to acquire “the most iconic music and entertainment business in the UK”, and would aim to replicate his company’s success in Canada.

The administrators said 27 stores were not included in the deal and would close immediately, resulting in 455 redundancies. – Reuters

1 ‘My rent here is so low it’s a joke’
2 ‘Sad day’ for House of Ireland as tourism retailer goes out of business
3 Goodbody’s planned €155m sale to Bank of China falls through
4 Legal tech start-up aims to make DIY divorces easier and cheaper
5 This charming man: how Paschal Donohoe won the Eurogroup presidency
6 Will family’s tax debt stop me getting my inheritance?
7 Ryanair accuses ‘screen scrapers’ of blocking refunds
8 Voxpro founders invest €250,000 in Republic of Work
9 The property developers who survived the crash
10 Is Ireland’s booming economy just an illusion?
Real news has value SUBSCRIBE