Flooring retailer Carpetright CFO to step down amid restructuring 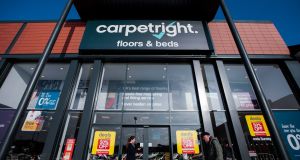 Carpetright is implementing a survival plan after negotiations with creditors in the past year. Photograph: Jason Alden/Bloomberg

Struggling UK flooring retailer Carpetright said on Tuesday its chief financial officer Neil Page would retire this month after more than a decade in the role.

The company, which is implementing a survival plan after negotiations with creditors in the past year, said Jeremy Simpson would replace Mr Page on February25th.

Mr Simpson is joining Carpetright from asset and energy support services group Sureserve Group, formerly called Lakehouse, where he was the finance chief.

Carpetright had raised £65 million (€74.2 million) through a share issue in June last year after creditors and shareholders backed a restructuring plan to close stores and cut jobs.

Many British retailers have either gone out of business or announced plans to close shops, struggling with subdued consumer spending, rising labour costs, higher taxes and growing online competition.

The company said on Tuesday it was on course to achieve the annual cash savings target of £19 million announced as part of the recapitalisation in May last year.

1 Dracula scenario for Irish economy: second outbreak and no-deal Brexit
2 Ireland faces 'deep downturn' this year and may not rebound until 2024 if there is a second wave
3 Why the Fed thinks Goldman is America’s riskiest bank
4 ‘The rental situation stops me moving back home’
5 Why are markets booming when a crash is on the way?
6 Major works at Rosslare Europort after €30m investment from Irish Rail
7 John FitzGerald: Civil Service expertise key to Government policy
8 How much do Irish people earn? And what will Covid-19 do to our wages?
9 Dublin consultancy Pathfinder set for expansion after buyout by Sia Partners
10 Why UK supermarkets are not making super profits
Real news has value SUBSCRIBE