Rent your furniture? Ikea looks to lease its book shelves and kitchens 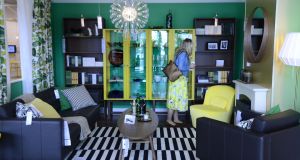 Ikea will start renting office furniture but may then move into leasing kitchens. Photograph: Cyril Byrne / THE IRISH TIMES

Ikea is to start leasing furniture in a radical departure from its traditional business model that the Swedish group believes could lead to new ways of customers owning products from office chairs to kitchen cabinets.

The first leasing trial by the world’s largest furniture retailer is set to begin in Switzerland as soon as this month, and will involve several different types of furniture, according to the company.

“We will work together with partners so you can actually lease your furniture. When that leasing period is over, you hand it back and you might lease something else,” Torbjorn Loof, chief executive of Inter Ikea, which owns the Ikea brand, told the Financial Times. “And instead of throwing those away, we refurbish them a little and we could sell them, prolonging the lifecycle of the products,” he added. The trial is the first in a series of tests that Ikea hopes could lead to “scalable subscription services” for different types of furniture.

It is part of a transformation of Ikea’s business model as the flat-pack furniture group moves away from purely selling its goods in out-of-town warehouses and leaving customers to collect and assemble their items. The retailer has opened smaller stores in city centres, pop-up shops for particular rooms such as kitchens or bedrooms, and improved many of its other services such as online sales and home delivery.

The chief executive of Inter Ikea, which controls the brand and concept of the retailer as well as the product range, design and manufacturing, said that leasing office furniture such as desks and chairs to business customers would be among the first trials.

But Mr Loof said that kitchens could be another possibility for renting rather than selling.“You could say leasing is another way of financing a kitchen. When this circular model is up and running, we have a much bigger interest in not just selling a product but seeing what happens with it and that the consumer takes care of it,” he said.

He added that Ikea now designed kitchens so that it was possible to change the cupboard doors without needing to rip out the whole set-up. “It’s interesting if you as a consumer say ‘I can change and adapt and modernise my kitchen if that’s a subscription model’,” he added. Mr Loof said that the leasing trial was part of Ikea’s push to develop a circular business model in which it not only sold products but could re-use them in making new items. He added that the retailer was looking to reduce its climate footprint by 15 per cent in absolute terms, which translated into a 70 per cent reduction per product by 2030 due to growth. Ikea is also considering a launch of its own spare parts business to allow customers to buy replacement components, such as hinges or screws, for furniture no longer stocked in its stores. Ikea has already started initiatives to recycle wood and some products such as mattresses in some countries. Mr Loof said it had already changed how it designed sofas to ensure they did not end up in landfill but instead could be separated more easily into individual materials such as wood, metal, foam and textiles.– Copyright The Financial Times Limited 2019