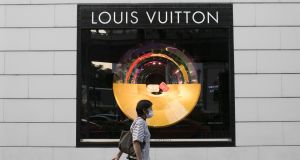 A Louis Vuitton store in Bangkok.

French luxury goods group LVMH on Tuesday announced record sales and profits for 2018 and said its fast-growing businesses in Asia had yet to be affected by the Chinese economic slowdown or the incipient US-China trade war.

Bernard Arnault, chairman and chief executive, said LVMH expected its brands and companies – which include Louis Vuitton, Christian Dior and Moët & Chandon champagne – to deliver continued progress in 2019 in spite of “an environment that remains uncertain at the start of the year”.

Fourth-quarter sales in Asia, which account for nearly a third of group turnover, were up 18 per cent after stripping out the effects of the loss of the Hong Kong airport concession – similar to the performance earlier in the year, according to finance director Jean-Jacques Guiony.

“We see no particular sign of a slowdown in the China market,” he said, although purchases by Chinese customers had shifted slightly to the Chinese mainland from Hong Kong and other east Asian markets, perhaps because of a weaker renminbi. “The market sees the glass as half-empty. We see it as half-full.” – Copyright The Financial Times Limited 2019

7 For RTÉ, some commitments are simply proving too big