Who is buying what? Why CSO’s retail data needs to be updated 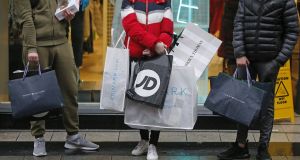 There’s an assumption that everybody rushes around shopping in the build-up to Christmas, so if there’s a monthly decline in retail sales in December there must be something wrong, some sort of squeeze on consumer spending. It’s more complex than that, however.

The latest monthly figures show retail sales fell by 0.4 per cent in December. But the headline number was anchored by car sales, which are always weak in December as consumers wait for the new licence plates in January.

If volatile car sales are excluded, the figures show there a monthly increase of 0.7 per cent.

Whatever the cause, the December sales were up 3.7 per cent on last year, nursed along by the growth in employment and wages, which is probably a better reading of the underlying trend.

An ongoing problem with the traditional retail sale measures, however, is that they are failing to capture the totality of the online spend, which is becoming a bigger part of the whole.

The numbers compiled by the Central Statistics Office exclude online sales by companies that deal exclusively online, but include sales that are done online at shops that also have a bricks-and-mortar outlet.

“So if you buy something online from Eason or Arnotts, that would be included in the sales for that outlet,” Alan McQuaid of Cantor Fitzgerald explained.

A bit like the figures for house completions, the retail data needs to be updated to reflect the impact of digital sales.