Sales miss overshadowed earnings that were ahead of expectations 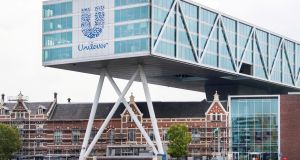 The maker of Dove soap and Ben & Jerry’s ice cream said fourth-quarter underlying sales rose 2.9 per cent. Analysts, on average, were expecting 3.5 per cent, a consensus forecast supplied by the company showed.

Mr Jope, who has been with the company for more than three decades, took charge at the start of the year.

He succeeded Paul Polman, who retired after a decade as chief executive during which he drove Unilever toward a vision of a company that valued sustainability as well as profits.

The end of his tenure was marred by a dispute with shareholders over a botched attempt to shift the Anglo-Dutch company’s main headquarters to the Netherlands.

Mr Jope said Unilever was still considering collapsing the company’s dual-headed corporate structure, an issue he told reporters was “important but not urgent”.

Mr Jope appears focused for the moment on improving business trends at the group, whose sales are at the bottom end of its medium-term targets, due to issues including hyperinflation in Argentina, intense competition in North America and weak retail environments in France and Germany.

Unilever shares fell 2.5 per cent as the sales miss overshadowed full-year earnings that were ahead of expectations.

“With growth weak but second half margins strong, we expect this to fuel the ongoing debate on Unilever’s top line versus bottom line,” Jefferies analysts said.

Unilever reported full-year sales growth of 3.1 per cent, in line with its forecast for growth at the bottom end of its 3 to 5 per cent forecast range.

Looking ahead, it said it expects 2019 market conditions to remain challenging and forecast underlying sales growth again in the lower half of a 3 to 5 per cent range, with continued improvement in underlying operating margin and another year of strong free cash flow.

For the forecast to come up to the top half of the range, Mr Jope said he would want to see a sustained turnaround in Latin America and continued improvement in Southeast Asia. Noting problems in Argentina and Brazil, he called Latin America the most troubled part of the world.

“Of course we’d prefer the top half of the range, but in the current uncertain market conditions ... the lower half is where I expect us to be operating,” Mr Jope said.

He noted also that the boost to sales growth the company had forecast from M&A was being reduced by the poor performance in China of Blueair, a line of air purifiers it bought in 2016. The business doubled in size from the time of acquisition, but has since shrunk back to where it was.

Unilever is also preparing for the United Kingdom to leave the European Union without a deal, stockpiling a few weeks’ worth of extra inventory of some products to guard against supply disruptions. This includes deodorants made in Britain and ice creams made in continental Europe, it said on Thursday.

Mr Jope has already embraced the 2020 targets Mr Polman set for Unilever in the wake of 2017’s rebuffed $143 billion takeover bid by Kraft Heinz. The target calls for an operating margin of 20 per cent.

He said on Thursday that Unilever remained on track for its 2020 goals.

“There’s nothing new about the intention, but so far at least the reality has failed to live up to it,” said analysts at RBC Capital Markets, referring to Mr Jope’s stated focus on accelerating growth.

In the fourth quarter, Unilever blamed Argentina, which makes up 2.5 per cent of its overall business, for hyperinflation that led prices to spike more than 50 per cent and therefore volume to fall more than 20 per cent.

But more broadly, sales volume in the Americas was flat. The same happened in Europe, though the company eked out 0.8 per cent sales growth in the region. Overall, underlying sales in developed markets grew only 0.4 per cent in the quarter.

The company blamed declines in France and competitive pressures in North America, particular in ice cream and mayonnaise.

For the full year, Unilever reported turnover of €49.6 billion, excluding its divested spreads business, with underlying sales up 3.1 per cent, in line with expectations. – Reuters