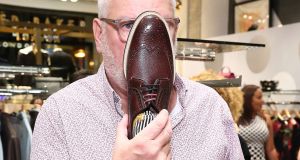 Ted Baker had announced an independent investigation into misconduct claims against Kelvin in December in response to an online campaign claiming to represent over 200 employees asking to end “forced hugging” and “a culture that leaves harassment unchallenged”.

“Kelvin has denied all allegations of misconduct. He has, however, today agreed to resign with immediate effect from his position as chief executive officer and as a director of Ted Baker,” the company said in a statement on Monday.

The retailer said the investigation would continue until the end of the first quarter or early in the second with the focus turning to Ted Baker’s policies, procedures and handling of complaints.

Ted Baker shares fell 4.8 per cent in initial trade before making up some ground to trade 1.4 per cent lower at 8.30am.

“I’ve decided that the right thing to do is to step away from Ted and allow the business to focus on being the outstanding brand it is so it can face 2019 with fresh energy and renewed spirit,” Kelvin (63) said in a statement.

Kelvin, who is top shareholder with a stake of about 35 per cent and has been CEO since its launch in 1988, went on a leave of absence a few days after the investigation began.

Ted Baker opened its first store in Glasgow in 1988 with quirky details on suits, shirts and dresses helping the company stand out from rivals.

Kelvin was appointed Commander of the Order of the British Empire in 2011 for services to the fashion industry.

Acting chief executive officer Lindsay Page has agreed he would continue in the role while David Bernstein will act as executive chairman, the company said.

“We are determined to learn lessons from what has happened and from what our employees have told us and to ensure that, while the many positive and unique aspects of Ted’s culture are maintained, appropriate changes are made,” Bernstein said.

Bernstein has indicated he will continue in the position until no later than November 30th, 2020, by which time a successor will be appointed, the company said.

“There’s always concerns around whether a founder-led brand loses some of its DNA when the founder leaves,” said Peel Hunt analyst John Stevenson.

“Kelvin was no longer critical in terms of the day-to-day running of the business, but there is a question of how important his influence was on the direction of the brand,” he added.

Ted Baker has more than 500 stores and concessions globally.