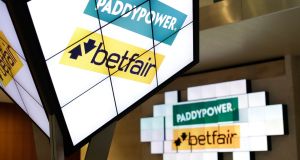 Paddy Power Betfair wants to expand Betfair into more countries, while in the US Fanduel is changing from a fantasy sports website to actual sports betting. Photograph: PA Wire

Paddy Power Betfair will ask shareholders in May to change its name to Flutter Entertainment plc to “better reflect” that it now controls multiple brands in different territories across Europe, the US and Australia.

For customers the change will mean nothing. Punters will still pop into Paddy Power for a bet, or check odds on Betfair, or if they are in the US wager a few dollars on the National Football League with Fanduel.

The change will only be significant if you are an investor. Even then it simply means that you will own shares in a company called Flutter Entertainment, not Paddy Power Betfair.

Peter Jackson, the group’s chief executive, confirmed on Wednesday that there would be no change to the corporate structure, and all that would happen was that the holding company would be renamed.

Jackson and his chief financial officer colleague Jonathan Hill stressed to reporters on Wednesday that the brands were still very much alive. According to the chief executive, a renewed marketing push means Paddy Power has very much “got its mojo back”.

The group wants to expand Betfair into more countries, while in the US Fanduel is changing from a fantasy sports website to actual sports betting.

Similarly, Sportsbet retains its leading position in Australia and the group’s latest acquisition, Adjarabet, gives it a similar foothold in Georgia – the Eurasian country as opposed to the US state.

It means something else as well. Next week’s national hunt racing festival at Cheltenham, where punters will risk more than €500 million, remains important. However, alongside that, March madness, where 68 US college basketball teams play a knock-out tournament to determine the national champion, and Australia’s spring carnival, culminating in the Melbourne Cup, have assumed equal status for what is now a global business.