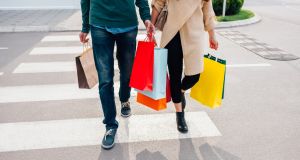 Retail sales were over 4 per cent higher by volume in June than in the same month last year but were held back by a poor car sales.

When the impact of car sales is stripped out of the figures, shoppers acquired 7.1 per cent more than in June 2016. The figures are adjusted for seasonal factors.

However, the pressure on prices is evident with figure for the value of transactions, with overall retail sales edging up by just 1.6 per cent – and by 3.5 per cent when motor sales are excluded.

On an annual basis, the fastest growing sector in furniture and lighting, where sales have jumped by 18.6 per cent in terms of volumes, and 12.4 per cent by value.

Two other sectors showed double digit volume growth year on year. These were electrical goods (+10.8 per cent) and “other retail” – a diverse group which includes wall and floor coverings, music and video, games and toys, garden plants, seeds and fertilisers, jewellery and pets and petfood – which was 13 per cent stronger.

The only two sectors reporting falls in volumes sold over the past 12 months were motor trades (-3.7 per cent) and food, beverages and tobacco (-0.6 per cent)

Despite the strong annualised rise outside car sales, the figures were down on May. In volume terms, seasonally adjusted sales were down 4.8 per cent on the previous month, and by 4.1 per cent in value.

However, when motor sales are excluded, sales did rise between May and June by 0.8 per cent by volume and were unchanged in value.

The sectors with the largest month-on-month volume increases were books, newspapers and stationery (+3.5 per cent), non-specialised stores, excluding department stores (+2.5 per cent) and electrical goods (+2.1 per cent).