The Bundesbank at 60: a bit too obsessed with hyperinflation? 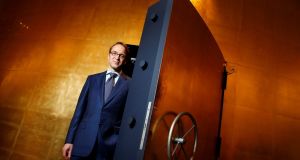 What do you get a lady for her 60th birthday when she already owns 3,381 tons of gold? Such are the first-world problems today when Germans mark the foundation, on August 1st 1957, of the Bundesbank.

At first glance the German central bank – housed in a brutalist monolith on a hill outside Frankfurt – is no classic beauty. Step inside, though, and you find yourself in an extremely functional and unpretentious structure.

Whether the institution it houses is just as functional and unpretentious is the subject of hot debate among birthday well-wishers around Europe. But all agree that, entering its sixth decade, the Frankfurt institution remains the gold standard for an independent central bank.

That independence is why the Bundesbank continues to command trust like few other postwar institutions, even after it swallowed its pride to join the 19-member harem known as the Eurosystem. To stay young, the lady has taken on a younger lover: the 49-year-old current president, Jens Weidmann. Imperious as ever at 60, Frau Bundesbank remains well able to defend her mandate: to maintain stable prices and fight inflation.

Curiously, things could have been very different if the Allies had listened to Germany’s first chancellor, Konrad Adenauer. He was 81 at the time of the Bundesbank’s foundation and had experienced first hand the hyperinflation and deflation of the inter-war Weimar Republic’s money-press politics. Still, West Germany’s first leader opposed giving the bank full independence. He lost that battle to Ludwig Erhard, his economic minister and eventual successor. Erhard insisted the best way to guarantee the Bundesbank’s mandate was to put it beyond political control.

With an eye on today’s birthday, and at the risk of being ejected as party poopers, some in Germany have wondered aloud whether the Bundesbank’s single-minded, inflation-fighting focus has, over the years, declined into tunnel vision.

Almost five years ago ECB president Mario Draghi promised to do “whatever it takes” within his institution’s mandate to protect the euro. That was attacked by the Bundesbank and its acolytes as the final paving stone to euro hyperinflation hell.

Five years on, after ECB bond-buying policies prompted the resignation of Bundesbank president Axel Weber, the warnings of the Bundesbank Cassandras have happily yet to come to pass. If anything the birthday girl’s hyperinflation warnings have become the finance market equivalent of Samuel Beckett’s Godot: everyone waits, nothing appears.