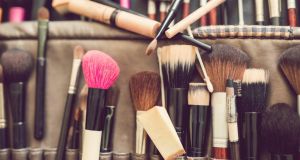 Sales in Estee Lauder’s makeup unit were up 16 per cent to $1.31 billion. Photograph: iStock

Estee Lauder forecast full-year profit and sales ahead of analysts’ views and posted higher-than-expected quarterly results as it sold more cosmetics from brands such as Mac and Tom Ford.

Shares of the company, which said it would launch a second limited edition makeup collection from Victoria Beckham next month, rose 4.3 per cent before the bell on Friday.

Sales in Estee Lauder’s makeup unit, which sells brands such as Smashbox and La Mer, surged 16 per cent to $1.31 billion (€1.1 billion). The business accounts for more than 44 per cent of total revenue.

Sales were boosted by the acquisition of Too Faced and Becca Cosmetics late last year, which added about 3.5 percentage points to sales growth.

Coupled with that, double-digit growth in sales in China and at duty-free stores at airports and online, helped drive revenue up 9 per cent to $2.89 billion in the fourth quarter ended June 30th.

Analysts on average had expected sales of $2.85 billion, according to Thomson Reuters I/B/E/S.

Estee Lauder is poised for growth due to its distribution to well-performing beauty retailers, such as Ulta Beauty, online players, and as demand for its products from a growing middle class in China has been strengthening, Oppenheimer & Co analysts said in a pre-earnings client note.

“We believe key drivers are in place to deliver these results.”

Analysts on average had estimated full-year profit of $3.79 per share and sales of $12.60 billion.