Future proof: Richard Tobin of the Abbey Tavern in Howth 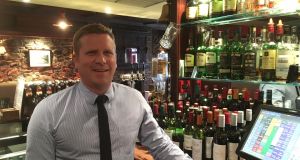 Richard Tobin: “We’ve worked hard at getting reviews, and have remained at number one restaurant and bar in Howth on Tripadvisor for over a year and a half”

The second World War was still raging when Richard Tobin’s great-grandfather, Frank Scott, took over the Abbey Tavern pub, Howth, in 1944. Twelve years later, his daughter Minnie Scott-Lennon, a widow at the time with three children, took over the business.

“My grandmother was a formidable woman who worked hard and brought up her children through great struggles,” Tobin says. “The snug is named Minnie’s Bar in her honour.”

The pub hosted music sessions as far back as the early 1960s. It started off with jazz, but folk music became the focus and it became the first venue for iconic musicians The Dubliners.

In the 1970s, Carling Black Label picked a song by the Abbey Tavern Singers, We’re off to Dublin in the Green, and it became wildly popular in Canada, where it achieved gold record status and put the singers on the map.

There were very few tours and albums across America, which drew tourists to the pub, including famous faces such as Princess Grace of Monaco, Ted Kennedy, Katherine Hepburn and John Wayne.

“Visitors and tour groups flocked to the pub to see the singing and dancing shows all through the 1980s and 1990s, but, after 9/11, when the American visitors stopped coming, there wasn’t anything to take up the slack,” says Tobin.

Tobin first came to work in the Abbey Tavern in 2007, and it was evident that local trade had been neglected. The recession hit the restaurant trade hard, and what had been a steady income stream declined significantly.

“With one tank empty, the other had to be filled up and business was difficult so I left the Abbey and went to work with Charlie Chalk in Searson’s, a pub that I still love.”

There Tobin learned to never accept anything less than excellence in every area of the business, especially dining and nurturing local trade.

“I had the desire while working there to buy my own place and was the under-bidder for Bellamys.

Shortly afterwards the Abbey Tavern came on the market after his uncle retired from the business. “I took over the deeds of the pub 70 years to the month from my great-grandfather.”

Tobin has a strong vision for the Abbey Tavern, and he has identified five income streams to ensure the future of the pub.

Strong local trade is Tobin’s paramount concern, and he nurtures this all year round. With the pub’s reputation it also has a strong tourist footfall, and people know about it now through Tripadvisor among other outlets.

“We’ve worked hard at getting reviews and have remained at number one restaurant and bar in Howth on Tripadvisor for over a year and a half.”

Weddings are a third stream of income. Tobin introduced them recently to great success, taking from 60 to 160 guests at a function.

The trad evenings and relations with tour companies remain an important income stream, and the recent introduction of comedy clubs and bands ensures constant use of the concert venue.

One of the key elements of Tobin’s plan is to have great staff. “Susan has been waitress here for 40 years, Jo is with us 30, and a younger member of staff, Nessa, is working 12 years.”

Tobin believes in working in all parts of the business, and wouldn’t expect his staff to do anything he wouldn’t do himself.

Tobin credits the women in his family who nurtured his business acumen.

“I grew up in this business. My parents owned the Yacht in Clontarf, and after studying business and bar management in DIT, I worked there as well as travelling to California to gain experience.”