Shares in London-listed Irish group jump as much as 4.6% on bank upgrade to ‘buy’ 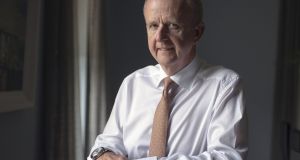 DCC, the fuel distribution-to-technology sales conglomerate, has the “financial headroom” to spend close to £1 billion (€1.2 billion) on mergers and acquisitions, according to analysts at Wall Street bank Goldman Sachs.

In a note where they upgrade their recommendation on the London-listed Irish group to “buy” from “neutral”, the Goldman analysts, led by Milou Beunk, said the group could use a combination of debt and equity financing to fund deals.

Shares in the group jumped as much as 4.6 per cent on Monday on the back of the upgrade, before ending the session 2.1 per cent higher at £63.20, its highest level in 2½ months.

Over the past five years, DCC has grown operating profit by 13 per cent a year, driven by its typical expenditure of about 7 per cent of its market value on mergers and acquisitions (M&A).

Ahead of the upgrade, DCC’s shares had underperformed the wider European market by 15 per cent over the course of more than two months, as investors moved out of what they perceived to be safe-haven stocks into more cyclical types of companies.

“Its derating creates an attractive entry point for two reasons: DCC is not a typical defensive stock; and its significant M&A growth potential and superior returns profile merit a premium valuation in our view,” the investment bank’s analysts said.