Scramble to file lobbying returns as fines regime kicks in 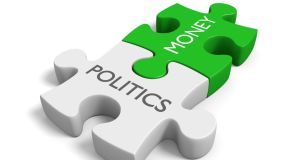 As organisations get used to the new regime, perhaps they will learn how to provide meaningful levels of detail. Photograph: Getty Images 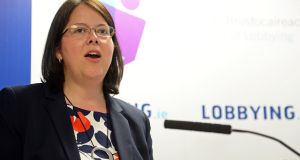 The year-long soft launch is over. From tomorrow, those who lobby the State but fail to register the activity, or register it late, face fines and potential prosecution – a €200 fixed penalty for late returns, with court action for more serious infractions.

Soft-spoken as she is, Ireland’s Canadian-born lobbying regulator, Sherry Perreault, now has some bite.

At the time of writing, returns were rattling in for lobbying undertaken in the last quarter of 2016. Have a snoop through the online register. It’s fun. You get to peek behind the curtains at the pre-budget and Christmas wish lists of corporate Ireland.

For example, you will see how airport owner Shannon Group lobbied Taoiseach Enda Kenny hard for his assistance to convince transatlantic airline Norwegian Air to bring flights into Shannon.

Rose Hynes, the group’s chairman and arguably the most senior businesswoman in the State, telephoned Kenny to ask for his support to persuade the airline “to commence services in 2017”.

The lobbying paid off. Kenny told the Dáil in November that Shannon could be a beneficiary if Norwegian were granted its transatlantic clearance by United States authorities. When clearance arrived last month, Kenny was again careful to name-drop Shannon.

Eoghan Murphy, Minister of State at the Department of Finance, must feel lobbied half to death in the rush to grab business for Ireland’s financial services industry following Britain’s decision to exit the European Union.

The British Irish Chamber of Commerce lobbied extensively to get Murphy to take part in a promotional video as part of Lord Mayor of Dublin Brendan Carr’s Brexit taskforce. The video, Greater Dublin’s Greater Than Ever, is now available online.

Different groups representing the Irish funds industry also knocked on Murphy’s door, while he also took a phone call from Deirdre Somers, chief executive of the Irish Stock Exchange (ISE), “to identify opportunities for Ireland in a post-Brexit environment”. The ISE was also on to the department to seek a cut in stamp duty on share trading.

The wealthy have a direct line to the top. Michael Noonan, the Minister of Finance, held a pre-budget meeting with Bill Conway, billionaire co-founder of the Carlyle private equity group, although this was recently flagged in Noonan’s ministerial diary. Bill Nowlan, founder of property company WK Nowlan, met Simon Coveney, the Minister for Housing, in Leinster House to tell him about “institutional funding for social and affordable housing”. He also brought the Minister along to a round-table discussion on the matter at Eversheds solicitors, although the return doesn’t reveal who else attended. Did those with the money attend?

Aidan Culhane, a special adviser to two previous housing ministers, Jan O’Sullivan and Willie Penrose, is now a consultant to WK Nowlan. Presumably he helped prepare his boss for what to expect at the meetings.

There are a few curios, too. John Player wants permission from the Department of Health, under tobacco packaging laws, to change the ink colour on a “cigarette stick” from grey to black, to match its products manufactured abroad. John Magnier’s Coolmore Stud wants traffic calming on local roads. The Sisters of Mercy want fracking banned.

Outside of the business sphere, possibly the oddest return was from abortion lobbying group, the Coalition to Repeal the Eighth Amendment. For some reason, it felt the need to reveal on the register the Christmas cards it sent to all TDs and senators. In the “Intended results” section of its return, it wrote: “Convey season’s greetings”.

As organisations get used to the new regime, perhaps they will learn how to provide meaningful levels of detail. When Conway met Noonan, for example, they discussed “general economic matters” and the intention was listed as update on Carlyle and “an exchange of views”. What views? The public is no more enlightened about what this billionaire discussed with the Minister for Finance in the lead-up to the Budget.

Perreault says information filed on the register “is meant to be complete, accurate and meaningful”. Her staff regularly undertakes analysis of the “completeness, accuracy and quality” of the returns, she warned, although the situation “is improving”.

The public-relations industry and professional lobbyists say they have “stepped up to the plate” with the new disclosure regime. But what about accountants and the legal profession, who in the past have lobbied for their clients behind closed doors? The register isn’t exactly full of disclosures from the biggest firms.

Perreault says she has conducted “extensive outreach” to these sectors, including articles in trade journals and presentations to major firms. Let’s see if they mostly still keep filing “nil” returns as the sanctions regime beds in.

Meanwhile, rural lobbyists beware. Perreault has noted “a marked regional disparity” in registrants and her office plans to “redouble efforts” to ensure compliance outside of the smoke-filled corridors of the capital’s centres of power.

No more tae and brack with councillors unless it is registered.

They keep falling for it. Every time McDonald’s “fights back” against Supermac’s owner Pat McDonagh’s “plan” to register his company’s trademark across the European Union, they give him exactly what he wants: publicity.

This week, we read that McDonald’s has lodged documents with the European Union’s Office for Harmonisation in the Internal Market, objecting to McDonagh’s latest trademark bid.

McDonagh is trolling his bigger rival, and they’re having fries with it. Supermac’s application is essentially the same as the one rejected last year.

McDonagh is an extremely good operator, and he has built a highly lucrative business in Ireland. But if he was going to embark on a major foreign expansion he surely would have done it by now.

Supermac’s is already in the UK, via Northern Ireland. Does anybody seriously believe McDonagh wants to bring the Mighty Mac and the snack box to Paris or Berlin? Does McDonald’s?

The multinational whinged the Irishman wanted to “take advantage” of its brand across Europe. He is already taking advantage of it, quite legitimately, by drawing one of the biggest restaurant companies in the world into a clever David-and-Goliath battle.

No matter which side prevails in the trademark dispute, McDonagh will remain the winner.

The Global Airfinance Conference took place this week at Convention Centre Dublin, bringing many of the leasing and airline industry high fliers to the city.

These guys don’t need Red Bull to give them wings.

Also in attendance was Alec Burger (inset above), chief executive of leasing company Gecas, who was interviewed on stage on Wednesday. A rumour did the rounds at the conference that the leasing supremo flew into town with a certain former Irish State-owned flag carrier, which seemingly temporarily misplaced his baggage.

Glad to see it also happens to the best of them.