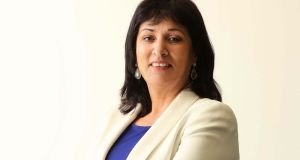 Anne Heraty: says CPL Resources expects to grow profitably for the rest of its financial year

Profits at listed jobs agency CPL Resources grew 7 per cent to €8.1 million in the six months ended December 31st. The company said on Thursday that revenues during those six months, the first half of its financial year, increased 5.7 per cent to €228.7 million from €216.4 million during the same period in 2015.

Earnings per share advanced 8.5 per cent to 23 cent from 21.2 cent. The company is declaring an interim dividend per share of 5.75 cent, which is 9.5 per cent higher than last year’s first-half payout.

Chairman John Hennessy noted that the group’s fees and profits continued growing during the six-month period.

The company said that longer lead times in appointing nurses in the UK cut permanent fees to 37 per cent of income from 40 per cent.

“The temporary staffing market remains highly competitive, but we have seen some margin improvement,” it added.

Barring foreign exchange transactions, CPL felt limited impact from political events during the six-month period. “During calendar year 2017 we expect the outcome of these events to become clearer, and consequent opportunities and challenges to present themselves,” the company said.

Chief executive Anne Heraty said the company expected to grow profitably for the rest of its financial year.