Telecommunications company says it will continue to concentrate on investment 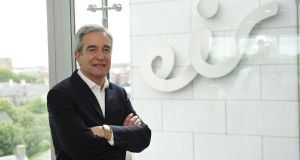 Richard Moat, chief executive of Eir: “Our vision for our customers is a converged future.” Photograph: Aidan Crawley

Telecommunications company Eir, which on Thursday released strong interim results, has held talks with three ratings agencies as it tries to secure an upgrade on the rating attached to its borrowings.

“We are quite hopeful that this will be reflected in our ratings,” he said.

Revenue for the six months to the end of December, the first half of its financial year, rose 2 per cent to €666 million as Eir reported strong momentum.

Richard Moat, its chief executive, said it was unclear how current “geopolitical events” – Brexit and the election of US president Donald Trump – would affect the economy and the business. He also suggested it might float in 2019.

Earnings at Eir rose 2 per cent for the six months, reaching €243 million. Underlying revenue for the second quarter was €336 million. Operating costs were €130 million, down 2 per cent.

Eir said the number of subscribers to its Eir Sport service increased “significantly”, as exclusive content such as UFC fights and Ireland’s rugby match against New Zealand drove uptake.

About 200,000 customers have signed up to the service, which is available on TV, tablet and online, with the Eir Vision television service netting 63,000 customers. The company now has 880,000 broadband connections, up 63,000 year on year.

Its Meteor mobile service hit its target of 95 per cent coverage for 4G data services three months ahead of schedule. Total mobile customers were just under 1.1 million.

“The business is performing in line with expectations, with continued underlying revenue and [earnings] growth,” said Mr Costermans.

He said it was on track to achieve single-digit growth year on year in earnings, and would reduce costs by 3 per cent for the first half.

“Our vision for our customers is a converged future, providing seamless access to fixed and mobile services. This will be brought to life this year with the launch of new innovative products such as voice over broadband, voice over wifi and voice over LTE services,” he said.

These services will begin launch between April and June. Eir also remains in talks with the Government over how its rural fibre rollout will affect the coverage map for the State’s National Broadband Plan, Mr Moat confirmed.