Sky plans to have net-zero carbon emissions by 2030 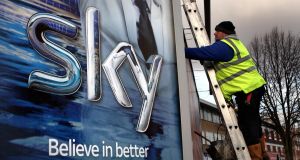 Sky will transition its 5,000-vehicle fleet so that it produces no emissions, as well as plant trees, mangroves and seagrass.

Sky said it plans to have net-zero carbon emissions by 2030, the latest company to support the effort to limit the global temperature rise to 1.5 degrees.

Sky will transition its 5,000-vehicle fleet so that it produces no emissions and work to make its TV and film production facilities the most sustainable in the world, the company said in a statement Tuesday.

It will also help its 11,000 suppliers become more environmentally friendly, including companies producing its TV series. Sky will also plant trees, mangroves and seagrass to offset any remaining carbon emissions.

British companies like BT and Vodafone have also announced a target of net zero carbon emissions. The UK government’s goal is for Britain to stop its contribution to global warming by 2050.

The company said it will vet its climate plan with Science-Based Target initiative (SBTi), a non-profit that helps companies interpret the complexities of the Paris climate agreement.

Increasingly, investors are demanding that companies use the services offered by organizations like SBTi. – Bloomberg

6 Should I buy an investment property or save for my dream home?

9 Crisis news ratings, robots that care and ‘Donald who?’

Our location disadvantages mean our vaccination rate must be among the quickest 05:40
Right to disconnect crucial to Government’s remote working aspirations 05:39
Eastdil to advise Johnny Ronan and Oaktree on glass bottle site 05:26
Crisis news ratings, robots that care and ‘Donald who?’ 05:10
Iconic Labs served with high court claim in London 19:43