NI house builder apologises to Harry and Meghan over adverts

Ballyclare-based Hagan Homes has offered to donate £10,000 to charity after using photos of the Duke and Duchess of Sussex without their permission 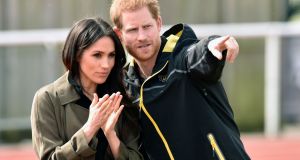 The UK’s Duke and Duchess of Sussex, Prince Harry and Meghan Markle, pictured on a visit to Bath University in 2018. Photograph: EPA/NEIL MUNNS

A Northern Ireland property developer who used photographs of the Duke and Duchess of Sussex without their permission in an advertisement campaign has apologised to the couple and offered to donate £10,000 (€11,858) to charity.

Ballyclare-based Hagan Homes, of the North’s largest house builders, used photographs of the Duke and Duchess of Sussex in what they said was intended to be a “light-hearted” campaign.

The social media and billboard campaign featured the slogan “Hagan Homes Fit For Part-time Royalty”, with photographs of the royal couple alongside suggestions that “leaving family and moving home can be daunting and stressful - not with us”.

The ad campaign also highlighted that: “You might still want to split your time between your new home and family home, best of both worlds.”

But it appears that the Duke and Duchess of Sussex, who are stepping back from front line duties with the UK’s royal family and have relocated to Canada, did not see the funny side of the adverts.

A complaint was made on behalf of Harry and Megan citing rules set out by the UK’s Committees of Advertising Practice (CAP) in relation to the royal family, which requires their prior permission to refer to them or use their images.

Hagan Homes, which claims to have built more than 4,000 homes since it was established three decades ago, has now scrapped the campaign.

James Hagan, founder and chairman, Hagan Homes said: “We have been in contact with representatives for the Duke and Duchess of Sussex and taken action to remove the social media posts and billboard advertising.

He said the campaign was intended to reflect Northern Ireland’s “typically light-hearted approach to a challenging situation”.

“Many young people struggle with the complexities of buying a new home and we were keen to emphasise that support is available in such circumstances,” he said.

Mr Hagan said it was not the company’s intention to “cause any offence and we sincerely apologise if any has been taken”.

“We believe Harry and Meghan are strong role models for all young people who are trying to find their own path in life and in recognition of this Hagan Homes is keen to make a donation of £10,000 to a charity of Harry and Meghan’s choice,” he said.