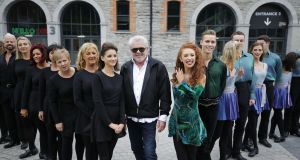 Costs towards staging the 25th anniversary Riverdance show contributed to pre-tax losses at the main Riverdance company increasing sharply to €1.94 million in 2018.

Latest accounts filed by Abhann Productions Ltd, which was founded by John McColgan and Moya Doherty, show that pre-tax losses increased from €289,281 in the previous year in the year to the end of June 2018.

A spokesman for Riverdance said the show did not tour overseas in 2019 as it prepared for the 25th anniversary show.

The new show is set to be unveiled at the 3Arena in Dublin later this week, which will kick off an extensive tour of the anniversary show in the UK, the US and China.

Riverdance played to about 400,000 people in 2018 with tours of China and the US along with shows at the Gaiety Theatre in Dublin.

The founders of Riverdance comprise Mr McColgan, Ms Doherty and David Orr. Pay to directors in 2018 totalled €1.38 million, compared with a pay-out of €1.4 million in 2017.

The company employed 23 staff, with payroll costs, including to directors, totalling €2.35 million for the year.

At the end of June 2018, Abhann Productions had accumulated profits of €3.2 million.

Since Riverdance began performances in Dublin in 1995, the show has been seen live by more than 27.5 million people in 546 venues in 47 countries across six continents.

The show has sold more than three million copies of its CD and sold 10 million Riverdance videos and DVDs.

The show was spawned from a seven-minute long interval performance at the 1994 Eurovision Song Contest. According to the directors’ report, they are “satisfied that the results for the year are consistent with expected levels”.

On the company’s future developments, the directors state that “the company has developed an established place for itself within its market and will continue developments in the area”.