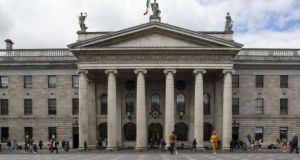 An Post is considering a new headquarters away from the GPO

Cool Planet Group, the energy services business led by entrepreneur Norman Crowley, has raised €31 million in funding, according to reports in both the Sunday Times and the Sunday Independent. The group, which includes Crowley Carbon and Electrifi, secured the investment from French group Tikehau Capital with London-based Systemiq Incubation also participating. Both newspapers say the investors are taking a minority stake in the business, with the Sunday Times indicating the shareholding will be less than 30 per cent.

The Dolphin Trust investment scheme has frozen payments indefinitely to 1,800 retail investors in the Republic, according to the lead business story in the Sunday Times. The promoter of the unregulated scheme, which has attracted €107 million from backers locally, has reportedly said it will make an offer to settle its debts. However, it has also warned investors they risk losing everything if they try to foreclose on properties that it plans to redevelop into luxury apartments in Germany. The trust has borrowed over €930 million from investors across a number of countries.

The same paper reports that An Post is eyeing two potential sites for a new headquarters, having previously said it was keen to move from its location in the GPO on O’Connell Street. The semi-State is considering the Exo building at Point Village and at the North Dock scheme under construction at the Three Arena. An Post has been considering a move away from the GPO since last year as the historic location needs significant refurbishment.

Property Group Marlet has sought approval to demolish buildings at the junction of Tara Street and Townsend Street in Dublin city centre. These properties include the Brokerage apartments, Ruin Bar, and the now vacant Long Stone pub, according to the Sunday Times. The move is part of a plan to enlarge Marlet’s College Square development.

Glenveagh Properties is looking to develop up to 2,500 new homes at the former Central Mental Hospital at Dundrum, the same paper says.

The developer is also likely to sell its north Dublin docklands scheme near the IFSC to the private sector, the Business Post reports. If this proceeds, 500 apartments planned for the site will end up on the rental market.

The newspaper says Google is frustrated at delays to its Boland Quays development project, which was due to be finished last October. The €300 million development, which is led by BAM, is one of the largest urban regeneration projects to have taken place in Dublin in recent years. The delay is reportedly due to issues related to concrete.

The Sunday Independent reports that the Government is assisting a senior Irish aviation leasing executive who has been confined in China for close to a year. The paper says efforts are ongoing to secure the return of Richard O’Halloran, a director of China International Aviation Leasing Services (CALS), who has become the focus of an investigation by authorities in the country.

The Sunday Independent reports that Wexford-based Harmony Solar is seeking planning permission for a €38 million solar farm near Dundalk. The proposed site has the potential to power up to 11,000 homes, the paper says.