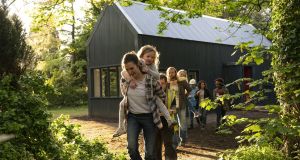 Irish film Herself, developed from an idea by its lead actor and co-writer Clare Dunne and supported by Screen Ireland.

The Irish housing crisis film that won a standing ovation at Sundance, the TV adaptation of Sally Rooney novel Normal People and the 17th century Kilkenny adventure story destined to be the first animated feature on Apple TV+ are among some 40 projects in a diverse Screen Ireland slate for 2020.

But in a mostly upbeat presentation to the industry on Friday, one off-screen juggernaut was impossible to ignore.

“I spent a lot of my life over in England, so that will tell you why I am sad today,” said Screen Ireland chairwoman Annie Doona.

After listing notable UK-Irish film co-productions such as Brooklyn, Room and The Wind That Shakes The Barley, Dr Doona said Screen Ireland had “every hope” of continuing its work with UK, “a valuable partner” for Irish film producers, after Brexit.

“I don’t think it’s the film industry in the UK that wants any rifts,” she said. “We hope that things roll out in a positive way.”

Ms Finnegan, a former Warner Bros executive who took up her role in August, also said Screen Ireland would fund slate development at Irish production companies for the first time since the recession.

“With limited resources, we plan to take a very tailored approach to this new funding,” she said.

But it is hoped the measure will help “more Irish companies to thrive” and reach the kind of scale required to operate internationally.

“In an increasingly competitive landscape, the quality of our content is more important than ever,” Ms Finnegan said.

Her announcement was welcomed by Oscar-nominated producer Ed Guiney, who at the same event last year called for a revival of slate funding, which gives companies greater agility to pursue projects in their early phases. Guiney’s Element Pictures used slate funding more than decade ago to commission the script for The Favourite, but the scheme was a casualty of arts funding cutbacks.

Dr Doona appealed to political party leaders to provide proper support for the arts and audio-visual sector. “Don’t just use us for a photo opp or a visit to a site,” she said.

There is still more work to be done on the Section 481 film and television tax credit scheme after a “number of improvements” introduced last year, Dr Doona added.

“You know Marie Antoinette said that when she died she’d have Calais written on her heart, I think some of us in Screen Ireland should have Section 481 written on ours because it has been a bit of a baptism of fire.”

Among the creative talent present at the event was Clare Dunne, the actor-writer behind Element Pictures feature drama Herself, about an abused woman who builds her own home on a friend’s plot of land.

Ms Dunne, who co-wrote Herself and plays the lead, was still “a bit jetlagged” after her return from the Sundance Film Festival in Utah, where Herself won rave reviews and was picked up by Amazon Studios for distribution in North America.

“It was a life-changing week,” she said, describing the ovation she and director Phyllida Lloyd received after the end credits rolled as verification of how “the most local and heartfelt and instinctive” story can have universal appeal. “I don’t think I realised it until that moment.”

Ms Dunne also recalled feeling validated after receiving €8,000 in funding from the Irish Film Board in 2016 to develop her script idea. “I felt hired by my country.”

Irish production companies are starting to do significant amounts of business with big-spending streaming companies such as Netflix, Amazon, Apple and Disney.

Wolfwalkers, Cartoon Saloon’s film about a young girl drawn into a world of demonic wolves, is expected to be theatrically released later this year and will then be exclusively streamed on Apple TV+.

Normal People, a 12-part series directed by Lenny Abrahamson and Hettie Macdonald, was commissioned from Element by the BBC, with Disney-controlled US platform Hulu then coming on board.

“We had a number of offers and went with Hulu because they were the most passionate and engaged and also made a very decent financial offer for the shows,” Mr Guiney said.

Foundation, an Apple Original drama, has also created more than 500 production jobs in Troy Studios in Limerick, while Netflix commission Valhalla, a spin-off of the series Vikings, is to shoot in Ashford Studios in Wicklow.

Ms Finnegan welcomed the expansion of facilities at Troy, Ashford and Wicklow’s Ardmore Studios. On a trade mission to Los Angeles in September 2019, Screen Ireland “heard first-hand the need to further invest in studio infrastructure”, she said.