A Best Picture Oscar may have to wait, but company is winning its war on film release windows 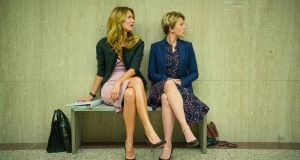 A year on from the Oscars ceremony that saw the Netflix-backed Roma fall conspicuously short of winning the Best Picture gong, the streaming giant approaches this year’s red carpet with two nominees on the list of nine.

Barring a shocking twist, the outcome will be the same, with neither The Irishman nor Marriage Story expected to take home the final prize of the night. The favourite now is 1917, the fine first World War film that just so happens to be best seen on the big screen.

And yet in the 12 months since Roma-gate, the battle lines between Netflix and the rest of Hollywood have been redrawn in a manner that leaves the rest of Hollywood looking weaker than before. By sheer dint of repeated effort, Netflix has blasted a hole through the system of release windows, taking more gloss off the allure of the cinema experience.

The back story here is that Roma, Alfonso Cuarón’s beautiful account of a domestic worker in 1970s Mexico City, was in cinemas for at best three weeks before being added to Netflix.

That it was released theatrically at all was part of Netflix’s money-no-object attempt to seal the ultimate in Academy Award recognition. But Roma’s eventual three-award haul didn’t in the end include the coveted Best Picture gong, with the triumph of the inferior Green Book interpreted by some as Oscar voters’ verdict not on Roma but on Netflix and its alleged cinema-undermining ways.

While some independent exhibitors, including Ireland’s Element Pictures (the owner of Dublin’s Light House and Galway’s Pálás cinemas), were happy to rake in a discerning crowd for Roma – drawing what it described as “a bit of heat” as a result – the standard cinema chain reaction was one of immense opposition to Netflix’s tactics.

In the US, AMC and Regal barred Roma from their pre-Oscar Best Picture showcases, while in Britain, Cineworld and Vue both got the hump with Bafta for giving multiple nominations to what Vue chief executive Tim Richards called a “made for TV” film.

Tensions resurfaced when Steven Spielberg pointedly and publicly waxed about how there was “nothing like going to a big, dark theatre with people you’ve never met before and having the experience wash over you”.

Responding to this and reports that Spielberg, an Academy governor, was pushing for an Oscars rule change that would preclude streamers’ titles from contention, Netflix offered a solid defence. It loved cinema, it said, but it also loved “access” for people who can’t always afford to go to a cinema or who live in a town without one.

In the event, there was no change to Oscars eligibility. The rule remains that to be in the running for awards consideration, a film only needs a seven-day run in a Los Angeles cinema. The distributors of films released “in non-theatrical media” on the same day, or at any time after their first day on a screen in LA, can spend millions courting the approval of Academy members if that’s what they fancy.

The 2019-2020 awards season has felt, therefore, like a sequel to the 2018-2019 one, with Martin Scorsese’s The Irishman in cinemas for at most 3½ weeks before landing on Netflix, and Noah Baumbach’s Marriage Story getting a month tops before its streaming debut.

Once again, it is independent cinemas that have shown what Element called the need to be “flexible”, with larger chains closing ranks.

Alongside the two Best Picture nominees, Netflix has given a decent batch of other titles, such as Uncut Gems and The Two Popes, similar-length or shorter cinema lives. Expect it to do the same again, with next winter’s bumper crop of titles normalising the phenomenon.

Pre-Roma Netflix Oscar-flirters Mudbound and Beasts of No Nation had no window at all between their extremely limited cinema showings and arrival on Netflix: they had what is oddly termed a day-and-date release.

So there is now a brief window where there was none before. But this shift doesn’t feels much less like the streamer compromising than it does like exhibitors losing.

While filmmakers, possibly because they want to work with Netflix in future, have gone a little quiet on the topic, the big exhibition chains are still mad as hell about these much-shrunk windows and have refused to agree to them. Their best hope yet may be that Netflix runs out of money before they do.

For its part, Netflix maintains that it is the rigid old theatrical windows that are disconnecting audiences from film.

Stuck in the middle of this war lies a great swathe of aspiring cinemagoers. The decision to go to the cinema is often a borderline one, subject to work pressures, the availability of a friend or babysitter, screen location and the weather. Netflix’s strategy only highlights the unromantic personal finance side of the thought process.

For a non-Netflix film, a cinema ticket is the price of the “big, dark theatre” experience, yes, but it’s also the price of not having to wait up to half a year to catch up with a hyped film. For a Netflix title, shelling out to see it in the cinema becomes the price of not waiting perhaps a mere three weeks or less for it to appear on an app for which they are likely already paying.

Netflix has made going to the cinema seem like more of an indulgence, and it will take a whole lot of “must be seen on the big screen” insistence to counter that feeling.