Our top 10 most read business stories of the year

Budget 2020 is there, of course, but who else made it into the big leagues? 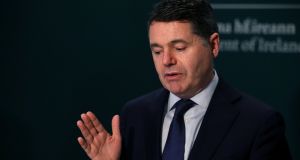 It does tend to sneak up on one, doesn’t it? No, not the Barry’s Tea Christmas ad, but our top ten most read stories of the year, a sure sign that the Christmas season is in full swing and the new year is just around the corner.

1. It’s fast becoming a tradition in this time of traditions that the lead article from our annual budget coverage tops the charts, clocking in at whopping 190,596 page views. This is pretty impressive if you take into account that nothing much happened in Budget 2020 as Minister for Finance Paschal Donohoe sought to restore Fine Gael’s reputation for financial probity in the wake of the battering it got over the runaway cost of the National children’s Hospital.

The fact that it was steady-as-she-goes was leaked well in advance, but that didn;t stop our readers from logging to see if he delivered on his promise, he did. Move along, nothing to see here.

2. Love him or loathe him one thing you can say about Conor McGregor is that he attracts eyeballs. this story about losses at the mixed martial arts fighter’s Irish company certainly drew them. It reported that McGregor Sports and Entertainment Ltd recorded losses of €309,462 in the 12 months to the end of December last. It also said that accumulated losses increased from €354,708 to €664,170 for 2018. The €309,462 loss last year followed a loss of €470,923 in 2017.

3. Our third most read story of the year concerns a receptionist in Longford who had her debt of €3 million written off for a payment of €1,600. Josephine Cooney of Mostrim Road, Ballymahon, Longford was unable to pay her debts and sought a financial rescue under the State’s personal insolvency regime. Personal loans of €2.65 million owing by the 65-year-old woman, who is employed as a receptionist, to consumer lender Cabot Financial were written off in exchange for a once-off payment of €1,432.

4. Clocking in a number is a subject matter close to people’s heart in the dank, dark, post-Christmas days: there has to be something/somewhere better than this. Turns out, as we reported, there are. Fiona Reddan rounded up eight places that will actually pay you to move there including Ollolai, in the heart of Sardinia which will sell you a house for €1 and Candela in Puglia will give a family of four €2,000 as an incentive to move there. The only catch? You have to actually live there. A hard thing to do as you wait for a bus in the freezing January rain.

5. Coming in at number five is our Friday columnist John FitzGerald’s take on our changing relationship with Britain due to Brexit. According to his thesis the relationship is evolving because our standard of living has been improving for decades. Historically, our relationship was predicated on large numbers of people emigrating to secure a better life for themselves and their families. Historically our wages were a good bit behind those in the UK but have, more or less, reached parity in the last decade. And if Brexit pans out the way many think it will, maybe the trend will be reversed British citizens coming here for a better life.

6. We all do it, every night (or at least most of us) but we shouldn’t. Ciara O’Brien’s salutary tale about why we should never leave our phones or other gadgets plugged in overnight the sixth spot in our ten most read of 2019. Ciara discovered when speaking to the experts that this a a far more common cause of domestic fires than we think and that it is better to buy a device that meets the safety standards rather than something that appears to be a bargain.

7. The next Budget 2020 story to make it in to the top 10, at number seven, concerns what the Government was likely to do to motorists in the upcoming budget. Car drivers were feeling jittery as environmental concerns dominated the agenda in the autumn and there was a feeling that this low lying fruit would be plucked, especially when it came to emissions.

8. Coming in at number eight is one of the stories that we, as a nation love to hers: somebody else (preferably in authority) telling us how great we are. An in this case the Organisation for Economic Co-operation and Development didn’t disappoint. According to this august body Irish workers are the most productive in the world, adding adding an average of €87 to the value of the economy every hour they work. Maybe we should take Christmas off to celebrate? Oh, right...

9. Interestingly, given the year that’s in it, our fist purely Brexit story comes in at number nine. This is another column by John FitzGerald which analysed Boris Johnson’s plan to create free ports in Britain where tariffs on goods wouldn’t apply. This is of interest to this part of the world not just because of the Shannon Free Zone but because it seem a possible solution to the Backstop and the North of Ireland issue.

10. Our final story of the year, an Interview of the Week by Peter Hamilton, was about a Meath couple, Noel and Valerie Moran, who sold their their payments business for €327 million in a deal that gave the couple a payout of up to €266 million. We learned that the business was born at a kitchen table in London during the height of the world’s financial meltdown and still grew up to be a strapping success.