Peloton ad has more than one problem

Criticised for being sexist, the US exercise bike ad carries further troubling messages 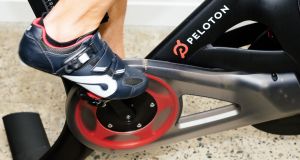 When an advertisement in which a young mother downs a gin cocktail in one long swallow gets a friendlier reception than one in which she exercises on a stationary bicycle at home, something has gone wrong. Peloton, the US fitness equipment company behind the latter, knows this to its cost.

Peloton’s ad has provoked a cascade of criticism for being old-fashioned and sexist. It showed an affluent woman looking mildly terrified at her husband’s gift of a $2,245 (€2,025) exercise machine, but turning winsomely grateful the following Christmas after a year of intense exercise. It evoked a postwar era of advertising that portrayed wives as submissive rather than independent.

Peloton’s effort was quickly satirised by Aviation Gin in its ad featuring the same actor drinking with friends, perhaps having escaped her husband for the night. Events move rather fast in marketing now: one company’s error is turned into another’s marketing meme before the media hubbub subsides.

The reassuring news for Peloton, apart from the adage that all publicity is good publicity, is that errors tend to fade. Its share price fell last week, cutting more than $1 billion from its market value, but has rebounded. It may take comfort from the Nike ad last year featuring the rebellious quarterback Colin Kaepernick, which briefly dented its shares but reinforced its brand.

Peloton’s problem is that its holiday season ad falls into an unusual and especially troublesome type of marketing mistake – one that draws attention to a weakness in the product. This was not simply a case of a misjudged commercial; it told a story that Peloton should not have wanted to be told.

The struggle to grab attention in a world of fragmenting media means that brands cannot play as safe as they did before. That is why campaigns that push boundaries and are initially seen as mistakes can later turn out to be nicely judged. Nike’s “Believe in something” ad featuring Kaepernick was a talking point and ended up being regarded as brave rather than offensive.

Brands, and agencies representing them, that know exactly what they stand for and how marketing works are often rewarded for being intentionally provocative. Benetton’s “Unhate” campaign in 2011, which showed world leaders kissing, provoked anger in some countries but later won awards: “You can like it, you can dislike it, you can’t ignore it,” one judge said.

But the stakes are high when product advertising is combined with social commentary: it can easily backfire. This happened with Pepsi’s 2017 ad, which implausibly portrayed the television star Kendall Jenner calming down a protest by handing a police officer a can of Pepsi. It was a problem with a Super Bowl ad for Dodge Ram trucks with the tagline “Built to Serve”, which featured a sermon by Martin Luther King.

Ads can easily provoke a backlash by mistake. The examples include Dove’s Facebook ad for body lotion in 2017, which showed a black woman turning white as she changed her T-shirt, and a similarly insensitive “White is Purity” ad for Nivea deodorant. As with Peloton’s campaign, which ran for some time before attracting viral derision on Twitter, social media make such blunders uncomfortably visible.

On the face of it, Peloton’s ad was this sort of error, although it was unintentionally sexist, rather than racist. As the heroine sits on a sofa with her husband at the end, she thanks him deeply, exclaiming, “a year ago, I didn’t realise how much this would change me”. Not only did her husband know better, it seems, but he was right to push her into becoming more toned.

It recalls Betty Friedan’s 1963 critique in The Feminine Mystique of the “happy housewife” portrait of women in the media. “Why have so many American wives suffered this nameless, aching dissatisfaction?” she asked, despite their having “an up-and-coming husband and a station wagon full of children”. The answer was their passive dependence on their partners.

On close examination, the Peloton ad does not portray a Friedan-like existence. The woman is a working mother, coming home in smart clothes to fit in exercise; the couple lead an impeccably upper-middle-class life, with abstract art and mid-century wishbone chairs. She is in a hurry but is not “young and frivolous, almost childlike”, as Friedan described the 1960s archetype.

From Peloton’s perspective, the underlying error is that she seems isolated and its product is not helping. “She just said my name!” she exclaims after the on-screen Peloton instructor calls out to “Grace in Boston”. Grace might well be surprised, given that an average of 6,400 Peloton members join each of its cycling classes, streamed from its New York and London studios.

Peloton’s pitch for its initial public offering in September was that “consumers are increasingly spending on experiences and are seeking meaningful community connections”. Its customers meet remotely instead of rushing to classes such as SoulCycle to work out with others, while raising a family and holding down a job in the two-thirds of US households with dual incomes.

The ad tells a different story. The IPO prospectus noted that “busy lifestyles, less free time, and changing household dynamics are driving demand for convenient fitness options”. But, while having a bicycle in the living room is handy, it does not help Grace find new friends. She comes to love the Peloton in her expensive home, but it may end up being as big a problem as her husband. – Copyright The Financial Times Limited 2019