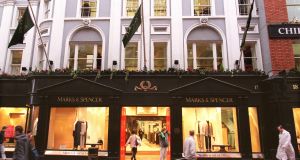 Marks and Spencer is to open a store in Limerick.

More than 100 investment firms and asset managers are making plans to flee London for Ireland as the window for securing a Brexit withdrawal agreement narrows, the Sunday Business Post reports. The Central Bank has seen a surge of funds seeking to operate here in recent months as the UK financial services sector steps up its preparations for a disorderly departure from the EU.

The Post also reports that the Spanish investment company, Cobas Asset Management, which opposed Aryzta’s €800 million shareholder cash call, has participated in the funding even though it insists the scale of the rights issue was too high.

Marks & Spencer has outlined ambitious expansion plans for Ireland despite reporting last week that the market here had experienced “difficult trading” in recent months, according to the Sunday Independent.

County manager Ken Scully said that it is about to agree a new store location for limerick which will sell both clothes and food.

The company will sell a range of four different bags in Dunnes Stores this month before selling in other retailers in the new year.

Investors are putting pressure on Kenmare resources to move its corporate headquarters abroad because they feel that Ireland’s stamp duty is making it too expensive for them to trade in the mining company’s shares, the Sunday Times reports. “A number of UK senior fund managers have indicated a preference for the company to redomicile in the UK ,” finance director Tony McCluskey said.

The Sunday Times also tells us that Ireland’s largest biodiesel producer could be put on the market after its owner Green Biofuels Ireland appointed the consultant PwC to advise on the company’s strategic options.

The company shareholders hired PwC to advise on potential funding strategies for the business, up to and including a sale.

Workers making pixel phone and parts for Google products are overworked, underpaid and operating in unsafe conditions an internal investigation by the tech giant has found, according to the Sunday Telegraph.