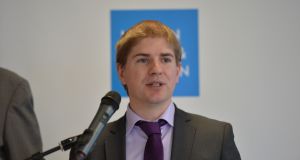 Tom Lyons has stepped down as executive editor of the ‘Sunday Business Post’. Photograph: Alan Betson / The Irish Times

Sunday Business Post executive editor Tom Lyons is to step down from his role at the newspaper in the coming weeks. Mr Lyons has led the editorial operation of the newspaper following the departure of editor Ian Kehoe in September.

His decision follows the completion last week of the sale of the newspaper to Galway businessman Enda O’Coineen, the chairman of Kilcullen Kapital Partners.

Sunday Business Post chief executive Siobhán Lennon told staff of the move, saying Mr Lyons had some months ago outlined to both her and Kilcullen Kapital his plan to leave the title but said he would stay to help with the transition to its new ownership.

Ms Lennon said a recruitment process for an interim editor and deputy editor was underway. A permanent editor will be appointed in the first half of 2019.

“Tom is a terrific journalist and great colleague. He has made a very significant contribution to the Sunday Business Post over the past four years. We wish him every success in his future career.”

Mr Lyons, a former journalist for The Irish Times, Sunday Times and Sunday Independent, wished Ms Lennon and Kilcullen Kapital “all the best with the paper as they continue to invest and build upon a great title”.

The newspaper was put on the market by its previous owners Key Capital.