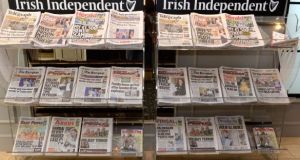 INM declined to comment on the departure of the two executives.

Human resources specialist Celine Doyle, who was promoted to the role of chief people officer at INM only six months ago, has left the group. She joined INM as a consultant about four years ago, before becoming its HR director.

She previously worked for Mr O’Brien’s Digicel group in Asia, as its regional head of human resources. She also worked in Burma for mobile phone company Ooredoo, with which Digicel once had a partnership.

A note from chief executive Michael Doorly, which was sent to all INM staff on Friday afternoon, said Ms Doyle “has decided to leave INM to pursue interests outside of the organisation”. Mr Doorly wished her well on her departure.

Gerry Wilde, the group’s long-serving head of IT, has also left INM.

Mr Wilde is among the witnesses due to be interviewed by High Court inspectors who were recently appointed to INM. The Office of the Director of Corporate Enforcement (ODCE) sought the appointment of the inspectors to investigate a range of corporate governance concerns, including a massive suspected data breach that included staff emails.

Mr Wilde featured prominently in affidavits filed by the ODCE’s Ian Drennan as part of his application for inspectors. According to one account in Mr Drennan’s court papers, Mr Wilde was the person who told former INM chief executive Robert Pitt that outside contractors hired by former chairman Leslie Buckley had removed INM’s back-up IT tapes in a secret operation.

The circumstances around the removal of the tapes, which the ODCE says was paid for by a company controlled by Mr O’Brien, is seen as one the central issues to be examined by the inspectors.

INM declined to comment on the departure of the two executives.