Executive will be responsible for launch of ‘addressable’ TV advertising 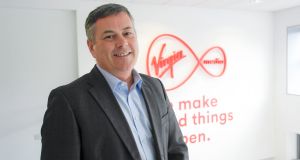 Mr Byrne will be responsible for all of the broadcaster’s revenue-generating activities, including advertising sales team Virgin Media Solutions, led by Paula McCarthy, and the in-house Red Hot Creative team.

He will report directly to Pat Kiely, managing director of Virgin Media Television. The appointment follows Gavan Byrne’s decision to step down as commercial director.

Ian Byrne joined the Dublin-based company in 2015 as director of digital and has also overseen its bid to develop addressable TV advertising.

Addressable advertising means the ads served to viewers of linear television channels in the commercial breaks will vary according to the location and demographic information of the viewer. This allows brands to pinpoint their target markets through television advertising as they would through online advertising.

Virgin Media Television hopes to launch addressable advertising in the Irish market in 2019.

Virgin Media Television is a subsidiary pay-TV and broadband company Virgin Media, which is in turn owned by Liberty Global, the multinational cable group owned by billionaire John Malone.

Liberty Global also has a stake of about 10 per cent in the British broadcaster ITV.