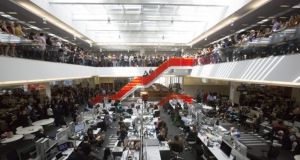 Operating profit at the ‘New York Times’ rose 30 per cent to $41.4 million in the third quarter.

The New York Times Co said on Thursday that the number of its digital subscribers showed a net increase of roughly 203,000 in the third quarter, allowing the company to pass the four million mark in total subscribers.

This includes more than three million digital-only subscribers. That figure represents the highest gain in digital subscribers in a quarter since the so-called Trump bump in the fourth quarter of 2016 and the first quarter of 2017 after the presidential election.

Not all of the new subscribers signed on for news. The Times said that, of the 203,000 new digital-only subscribers, 143,000 signed on for digital news products, with the remainder paying for the company’s cooking and crossword features.

Net income reached $24.9 million (€21.8 million), a 23 per cent drop from last year when the publisher realised a one-time gain from the sale of a dam owned by a closed paper mill in which the company has a joint-venture investment.

Operating profits, the company’s preferred measure, rose 30 per cent to $41.4 million in the period.

“This quarter, subscription revenues accounted for nearly two-thirds of the company’s revenues,” Mark Thompson, the chief executive and president, said in a news release. “We’re investing aggressively in our journalism, product and marketing and are seeing tangible results in our digital growth.”

Revenue from digital subscriptions rose to $101.2 million in the quarter, an 18 per cent increase compared with the same period last year. Online advertising was also a bright spot, jumping 17 per cent to $57.8 million.

In an earnings call, Thompson attributed the company’s performance for the quarter to several factors, including growth in the Cooking product, a discounted introductory offer to subscribe to the Times and “a suddenly electrifying news environment” with events that played to its strengths.

Digital revenue through the first nine months of the year topped $450 million, the fastest-growing part of the business. In 2015, the company announced its ambition to generate $800 million in yearly digital revenue by 2020.

Revenue from print advertising continued to tick downward, decreasing by 0.7 per cent compared with the same time period last year. Total advertising revenues increased 7 per cent. All together, revenue increased 8 per cent to $417 million. Looking ahead, Thompson expecteds continued digital subscriber growth in the fourth quarter along with further increases in digital advertising. – New York Times