Can anything beat it in the ratings? Only a dramatic, rare sport event may stand a chance 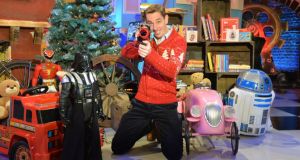 Ryan Tubridy obliterates the competition in a preview image from ‘The Late Late Toy Show’ of 2014, the most-watched programme on Irish television this century. Photograph: Alan Betson / The Irish Times

Not only was last November’s show, with an audience of 1.55 million, the most-viewed programme of 2018, but the past 10 Toy Shows are the most-watched shows on Irish television this century.

On this, at least, the viewing public is nothing if not consistent. In other respects, the end-of-year charts published by ratings body TAM Ireland confirm that things are changing for broadcasters – and getting harder for them – over time.

Increasingly, the biggest and most reliable of ratings-pullers are events that are broadcast live. Five years ago, 11 of the top 20 titles were live programmes.

Last year, 16 of them were live (or partially live in the case of 13th-placed I’m a Celebrity, Get Me Out of Here).

The ratings don’t include streams on a broadcaster’s player. This means the total audience will be higher than the official ratings

Sport is/was the dominant genre, and an expensive one to boot, but exactly how well a sporting event performs depends on what exactly is at stake. The figures compiled for TAM by Nielsen prove what logic suggests: foregone conclusions are bad for business, rare spectacles good.

The 2018 All-Ireland football final, in which Dublin was expected to beat Tyrone and did, was watched by 841,100 people (seventh in last year’s most-watched list). This was a lower audience than in 2017 (1.14 million, second place) and also five years ago (1.06 million, third place).

On both occasions, it was history-chasing Mayo that helped secure the ratings triumph if not the Sam Maguire.

The England soccer team, on the other hand, isn’t often found near the top of the Irish television ratings, but the fact that it was playing its first World Cup semi-final since 1990 was enough for Croatia v England to claim fourth place on the 2018 list with an average viewership of 924,400. Years of hurt are, therefore, proportional to audience size.

“Event TV” has become common industry jargon this decade because the pulling power of live television extends beyond both sport – and even Ryan Tubridy in a festive jumper.

The ferocity of the Beast from the East was enough to put the RTÉ Six-One and 9pm news bulletins from March 1st, 2018, in the top 10 for the year in eighth and 10th place respectively, while eleventh place was taken by the strange glory that is the Eurovision Song Contest.

Ireland reached the grand final in 2018 for the first time since 2013, which was also the last time Eurovision made the top-20 ratings list. Despite this helpful comeback, Eurovision’s ratings record falls just shy of the full douze points, with its 2018 audience of 701,900 down 13 per cent on 2013’s count.

Some caveats: the rankings as issued only include the best-rating episode of a series, which can play down the performance of the non-live hits. In 2013, Love/Hate’s biggest episode was second in that year’s list with a phenomenal 1.12 million viewers, but other episodes from the run would have been among the most-watched hours on Irish television that year had the rankings been compiled differently.

Audiences, for the most part, are fragmenting

Using the TAM Ireland/Nielsen figures to compare the popularity of programmes over time is also problematic because the way that people watch television is changing and the measurement methodology hasn’t found an obvious way to keep up.

The “consolidated” audience figures quoted here are extrapolated from the viewing behaviour of Nielsen’s panel of 1,050 homes. They represent the average audience across the entire programme as it went out on a linear television channel. They also include people who caught up within seven days of its broadcast, but only if they did so by playing back a recording made to their TV platform’s box.

The ratings, for now, don’t include streams on a broadcaster’s player. This means the total audience will be higher than the official ratings for many shows, especially those with favourable word-of-mouth and those aimed at younger viewers with comedy The Young Offenders being a standout on both fronts here.

The steady rise of streaming is therefore having a dampening impact on ratings over time. In this context, for a show like Room to Improve, made for RTÉ by Coco Television, to build on its consolidated TAM audience and become the fifth most-watched programme of 2018, is one solid achievement.

But the loss of linear channel viewers to streaming doesn’t explain all of the rating falls over time. The institution that is the Toy Show is an anomaly.

Audiences, for the most part, are fragmenting. Comparing the top-show data from 2018 with that from five years earlier indicates that soap operas, other dramas and even live (or sometimes live) talent show franchises aren’t quite as well-watched as they used to be.

After the Toy Shows, the most-watched programme on Irish television this century was the first episode of the Irish version of Who Wants to Be a Millionaire?, which lured an audience of 1.276 million way back in October 2000.

For Gay Byrne’s quizmaster turn to be surpassed, or better still to prevent it being 11 out of 11 for the Toy Show, or better still again to topple the official century record-holder that is the 2014 Toy Show (with an average consolidated audience of 1.59 million), one of three things will have to happen first.

Mayo will have to reach the All-Ireland football final again and edge into what looks like a winning position.

The Republic of Ireland will have to make the latter stages of a major soccer tournament. Or the Irish team will have to go deep in the Rugby World Cup. Readers can decide for themselves which of these is the most likely.