The year of slow news, fake news and ‘Love Island’

2018 had everything: scandals, outrages and some terrible slurs on journalists 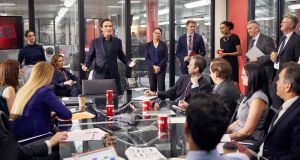 January: As the year begins, the big question is whether 2018 will strive for credibility and enlightenment in an increasingly surreal world, or capitulate to the bizarre flow. Over to the head of the Catholic Church for his thoughts.

“In today’s fast-changing world of communication and digital systems, we are witnessing the spread of what has come to be known as ‘fake news’,” notes Pope Francis. Fake news, he suggests, works a bit like the serpent in the, er, Garden of Eden.

February: On a quick tour of another media company’s premises, I’m told there’s a daily meeting everybody calls “the 9.15”, but it’s actually held at 11am, which might be the most “Irish media” thing I’ve ever heard.

I get involved with an ultimately disappointing “pre-apocalyptic” TV drama in which the sun is malfunctioning and the Earth has only five crime-ridden years left. Amazingly, someone still finds time to goad a journalist character that they’re wasting their time “at the sorry end of a career in a dying industry”.

March: After mulling it over for a week, Facebook takes out full-page advertisements in newspapers apologising for the parts of the Cambridge Analytica scandal it has admitted. “I promise to do better for you,” chief executive Mark Zuckerberg rashly concludes.

It’s a nice try, but it’s not as funny as “FCK” – KFC’s full-page mea culpa after a supplier hiccup unforgivably saw the fried chicken chain run out of chicken.

In a valiant bid to bring back “slow news”, the New York Times publishes its obituary for Charlotte Brontë, who died in 1855.

April: Netflix posits that “Netflix and woof” is the latest living room craze and that 13 per cent of its members have turned off a show because their pet didn’t like it. “The snuggle is real,” claims Netflix, as was the press release.

May: We’ve been sent good weather, as the subjugated women say in The Handmaid’s Tale, which is back for the second of what its makers threaten could be as many as 10 seasons.

Dubious interpretations of a new data-privacy law in Europe means “remember us?” marketing emails from long-lost databases are coming almost as thick and fast as magazine covers of Meghan Markle, the royal bride who is almost single-handedly keeping some publications solvent.

Russian dissident journalist Arkady Babchenko is reported dead, but shows up the next day – alive – at a press conference in Ukraine. That’s dedication.

November: In need of some escapism, I catch up on Sharon Horgan’s new show Women on the Verge, a comedy about a journalist called Laura who spends her days in the grip of professional and personal despair. It’s a real break from everyday life.

June: Facebook puts out a recruitment ad for “news credibility specialists”, a category of worker more traditionally known as editors. Pope Francis, who had said he wanted to contribute to “rediscovering the dignity of journalism”, does not apply.

July: Nobody is watching any television except Love Island, which in Ireland is on the channel known at the time as 3e, once called Channel 6 and now named Virgin Media Two. On TV electronic programme guides, it can be found at number 105. Couldn’t be simpler.

August: After more than 130 people are killed in an earthquake on the Indonesian island of Lombok, survivors post the word “selamat”, which in this context means “unhurt”. Alas, the Facebook algorithm goes along with its alternative definition, “congratulations”, and showers their pages with confetti and balloons.

September: Press, a new BBC drama about all the wonderfully likeable and modest individuals you will find working for newspapers, veers away from this uncanny authenticity by perpetuating the fake news that tabloid journalists are better dressed than broadsheet ones. This is war.

Shane Ross’s Department of Transport, Tourism and Sport snatches “admin error” gold by issuing a statement praising the tenacity of Dominant Puspure, who has apparently won her event in the rowing World Championships. Only it was Sanita Puspure who did that, her performance having been described as “dominant” in an earlier headline.

October: The editor of Waitrose’s magazine loses his contract publishing gig after BuzzFeed reports on his weirdly irate “killing vegans, one by one” response to a pitching freelance, prompting a surprising number of unimpressed journalists to insist that by these crazy standards of basic professionalism, they too would have been fired a long time ago.

It turns out not everyone signs off their emails with “all the best”.

In its presidential referendum exit poll, RTÉ sneaks out a question about whether or not it should keep broadcasting the Angelus and two-thirds of people say they should. To be fair, those gongs are less depressing than Trump.

November: In need of some escapism, I catch up on Sharon Horgan’s new show Women on the Verge, a comedy about a journalist called Laura who spends her days in the grip of professional and personal despair. It’s a real break from everyday life.

December: Google reveals Kylie Jenner was right and “how to get old Snapchat back” was one of its top search terms of the year.

“Persisting with this hopeless endeavour is irresponsible,” says Love Island’s Dani to Love Island’s Jack. No, sorry, contrary to any Instagram posts asserting the opposite, they’re still together, and that was the Bloomberg editorial board on Brexit.