Media & Marketing: Licensed products triumph in the aisles, but not all stories lead to merchandising empires 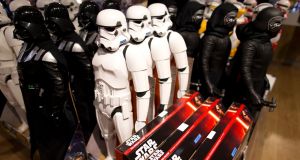 A wonderful archive clip of the late Barry Norman reviewing the original Star Wars on the BBC’s Film 77 leaves no doubt as to his opinion on a certain side effect of its box office triumph.

Observing that the “overwhelming success” of the picture had surprised everyone, Norman concluded that had 20th Century Fox been able to predict it “we should already be inundated with commercial spin-offs such as toy models of R2D2 and C3PO”.

Though they wouldn’t be in the shops in time for Christmas, the “ray guns, posters, spaceships, T-shirts and Star Wars wallpaper, bubble baths and breakfast foods should be on the market pretty soon”, said Norman, good-natured, but already weary of a merchandising phenomenon that was then on the cusp of a great big explosion.

In 1977, back when bubble bath was probably a bigger deal than it is today, toy spin-offs from Hollywood output were still remarkable – the preserve of the veterans at Disney and that’s about it. Now, at the top level, they are not so much a side effect of success as they are part of the pre-production business plan. It’s not necessarily a bad thing: as a suffering Doctor Who fan in the mid-1980s, I’d have killed for a slice of the Dalek chocolate cake that Marks & Spencer was casually flogging 20 years later.

But while the toy store aisles – the ones that haven’t been taken down as a consequence of Amazon’s ascendancy – are dominated by TV and film tie-ins, not everyone chasing lucrative revenue from merchandising makes it as far as the shelves: not all stories give birth to an army of toys.

After 18 years of making shows for kids, Irish animation company Jam Media this year sealed its first ever toy licensing deal courtesy of its endearing Nick Jnr show Becca’s Bunch. Being on a platform like Nick Jnr isn’t itself enough, according to Jam’s boss John Rice: a show needs to first prove that its universe lends itself to being recreated in tactile, imagination-sparking play.

Becca’s spin-offs haven’t hit toy shops just yet, but when they do, it won’t be a half-hearted affair. Californian company Jakks Pacific, its global master toy partner, will from next autumn roll out figurines, plush toys, musical instruments, vehicles and playsets, followed by board games, dress-up and role play products, furniture, ball pits, play tents . . .

To date, licensing deals tend to spring from series that are broadcast on linear channels rather than those that are solely found on on-demand platforms. This will change. A curious line of Stranger Things merch aside, Netflix is still only warming up when it comes to exploiting the licensing potential of its own commissions. In September, however, it brought in a big gun, appointing Disney veteran Christie Fleischer as global head of consumer products.

“It is still early days,” says Netflix’s vice-president of kids and family, Melissa Cobb, who is leading the service’s massive push into children’s content. “We’re very specific and very careful about how we go about that.”

That’s quite right, of course. But clearly, if kids do engage with any original characters it produces, the opportunity is there for Netflix to swell the coffers through spin-offs. Hey, it can even sell them via Amazon.

Disney, set to go head-to-head with Netflix by launching a streaming platform of its own in late 2019, remains the king and queen of this enterprise, and since buying George Lucas’s Lucasfilm in 2012 for $4 billion (€3.5 billion) – a bargain– it’s the Galactic Empire stormtrooper of it too. Witness the egg on toymaker Mattel’s face from losing the contract to make Disney Princess dolls to Hasbro in 2014: not only was this licence estimated to be worth up to $500 million a year to Mattel, it was also a buffer against declining sales of Barbie.

But Hollywood, the kid-targeting broadcasters and Netflix all have one rival in common: the games industry. This year’s award for fast thinking goes to the brand mash-up of 2018’s hot battle game craze Fortnite and Hasbro’s 1930s board game Monopoly, though the alliance shouldn’t be too much of a surprise given Monopoly has more content licences than Community Chest cards and both games are based on being the smug last-one standing.

Fortnite-edition Monopoly is flying off the shelves, toy retailers report, maybe because it appeals to those parents who want to bring their kids’ obsession into the kind of offline social setting that they can get their heads round. Whether it is of any interest whatsoever to discerning gamer kids is another matter.

For now, the only lessons we can safely draw are these: Barry Norman knew what he was talking about. They will make board games tying into absolutely anything – anyone want to roll the dice on a game of 18th century Cornish mining saga Poldark? The plot of the in-development Barbie movie should send our heroine on a desperate quest to claw back some popularity, but it won’t.

And then there’s this, the most important lesson of all, kids are cruel: once they’re gone onto the next fad with no mercy for anyone’s bottom line, then that’s it. Back to the drawing board.