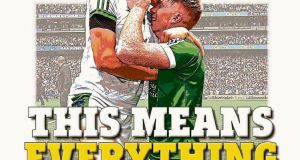 Formpress Publishing is a subsidiary of Iconic Newspapers and the company operates 14 local news titles here including the Limerick Leader, the Dundalk Democrat and the Leinster Leader.

The accounts show that revenues at Formpress Publishing Ltd declined by 3 per cent from €12.6 million to €12.2 million in the 12 months to the end of March, 2018.

The directors say they are satisfied with the results for the year and that they are in line with expectations.

Other Formpress titles include the Kilkenny People, the Longford Leader, the Leinster Express, the Tipperary Star, the Donegal Democrat, the Leitrim Observer and the Nationalist based in Clonmel.

The issue after the historic win was a sellout which resulted in a reprint of the souvenir supplement and that was also a sellout.

Formpress is 100 per cent owned by Iconic Newspapers which paid Johnston Press €8.7 million for the Irish titles in April, 2014.

The pay to key management personnel across Formpress last year increased from €1.21 million to €1.3 million.

Numbers employed by the company last year increased from 161 to 163 with staff costs, including pay to executive directors, declining slightly from €6.59 million to €6.53 million.

The profit takes account of combined non-cash depreciation and amortisation costs of €575,427 for the year.

The company’s shareholder funds at the end of last March totalled €11.5 million. The company’s cash pile increased sharply from €454,511 to €1.82 million.

The amount paid by Mr Denmark for the titles is a fraction of Johnston Press’s outlay for local newspapers during the boom.

The group had spent in the region of €300 million on all of its Irish titles before the recession hit resulting in sinking advertising and circulation revenue.

The directors’ report for Formpress states that “as for many businesses of this size, the industry in which it operates continues to be challenging. With the risks and uncertainties faced in mind, the directors are aware that any plans for the future development of the business may be subject to unforeseen future events outside of our control.”

On the firm’s future developments, the directors said it had developed an established place for itself within its market and will continue developments in the area.