Intel expansion, taxing times for the rich and tracking Google 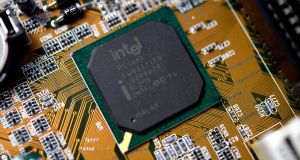 A close-up of an Intel computer circuit board. The company has formally announced outline plans for a major expansion of its Leixlip campus in Co Kildare. Photograph: Sascha Steinbach/EPA

Chip giant Intel has formally announced outline plans for a major expansion of its Leixlip campus in Co Kildare. Following reports in The Irish Times last month that the company was moving to significantly increase capacity at the plant, the Sunday Times reports that the US group has submitted a planning application for a 110,0000 square metre factory. Intel already has separate planning approval from 2017 for a 90,000 square metre plant at the Kildare site.

Wealthier taxpayers can expect closer attention from the Revenue, as the Sunday Independent reports that the threshold above which people come to the attention of the High-Wealth Individuals division of Revenue is likely to fall from €50 million, possibly to as low as €20 million. That would bring hundreds of people under its oversight for the first time, the paper says. The new threshold is due to be set next month.

Tracking users through Google Maps is the subject of ongoing discussions between the company and the Date Protection Commission, the Sunday Business Post reports. Amid growing concern about how social media collects personal data and what it then does with it, the regulator says its engagement is to determine whether any further action is required.

Rising construction and site costs amid competition for sites from housing projects has seen the cost of building nursing homes rise 20 per cent to €160,000 per bed, the Sunday Independent writes. A report by Bank of Ireland says €1.2 billion in investment is needed if the State is to avoid a major shortage of nursing home beds.

Ulster Bank is stealing a jump on competitors by allowing high-income mortgage applicants to borrow up to 4.5 times their incomes, the Sunday Times reports. Until now, under the exceptions permitted by the Central Bank, the banks were limiting multiples to four times earnings. Wealthier aspiring househunters will have to find a deposit of at least 20 per cent to qualify for the new multiple, the bank says.

The paper also reports that the success of the Domino’s pizza franchise in Ireland has attracted the interest of members of the billionaire US Bronfman family, who have taken a significant stake in Shorecal, the biggest Irish Domino’s franchise.

Health food stores face major bills for back taxes after the revenue ruled in December that food supplements should be subject to VAT, the Sunday Independent reports. The withdrawal of a VAT concession for vitamins, minerals and fish oils will see a large number of companies subject to millions of euro in tax bills dating back four years, according to Ciarán Hurley, senior VAT partner at CKH Financial Services.