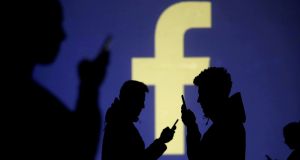 There were reports that the app helped the social network identify potential targets for acquisition. Photograph: Reuters

Facebook is shutting down an app that paid $20 (€17.50) a month to people aged between 13 and 35 for allowing it to collect data on their iPhones.

The “Facebook Research” app enabled the social network to monitor a user’s web and phone activity, including how they used other apps, according to an article published on Tuesday by TechCrunch.

The news comes six months after Facebook pulled another security app, Onavo Protect, from Apple’s app store, after Apple decided to bar apps that monitored which other apps were installed on a phone.

Onavo had allowed Facebook to collect this type of information, raising concerns that the company was monitoring rivals’ success and gaining a competitive advantage. There were also reports that the app helped the social network identify potential targets for acquisition.

TechCrunch suggested that the Research app shared similar code with the Onavo app - and may have also been in violation of Apple policy. The Research app was available through a policy that allowed companies to offer tester apps to their employees only, the report said.

In response, Facebook said on Wednesday that it would remove the market research app from Apple’s operating systems.

A Facebook spokesperson said: “Despite early reports, there was nothing ‘secret’ about this; it was literally called the Facebook Research App. It wasn’t ‘spying’ as all of the people who signed up to participate went through a clear onboarding process asking for their permission and were paid to participate.”

Facebook said the Research app was not built to replace Onavo and had in fact been set up in 2016. It is unclear whether the app will continue to be available on Android devices.

Apple did not respond to a request for comment.

The news came after rising tensions between two of the world’s largest technology companies following Apple’s critical stance towards privacy at Facebook in the wake of the Cambridge Analytica scandal.

Tim Cook, Apple’s chief executive, last year said there should be regulation that limited the use of customer data, and that companies such as Facebook used customers as a product to sell to advertisers. By contrast, Apple’s business model was centred around selling products to customers, he said.

Mark Zuckerberg, Facebook’s chief executive, dismissed the criticism as “extremely glib” and “not at all aligned with the truth”. – Copyright The Financial Times Limited 2019