Other top performers at Dublin venue include Kylie, Niall Horan and Andrea Bocelli 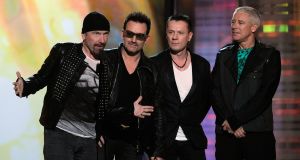 LAS VEGAS, NV - MAY 22: Musicians The Edge, Bono, Larry Mullen Jr. and Adam Clayton of the band U2 accept the Touring Top Artist Award onstage during the 2011 Billboard Music Awards at the MGM Grand Garden Arena May 22, 2011 in Las Vegas, Nevada. (Photo by Ethan Miller/Getty Images for ABC)

The figures show that 46,529 attended the sell-out shows over four nights at the Live Nation-owned venue.

During 2018, 820,391 tickets were sold for the 3Arena, putting it in the top 10 best attended music venues across the world in 2018. Box office receipts are shared between promoter, artist and venue operator.

The Taoiseach, Leo Varadkar, was one of the 7,606 Kylie fans to attend the singer’s gig at the venue on December 3rd last, when ticket sales generated €666,204 at the box office.

Last year was also a strong year for Irish acts performing at the 3Arena – the Pollstar figures show that The Script generated €1.85 million from three gigs at the venue last February.

Two sell-out shows from Niall Horan last March earned €1 million at the box office as Horan enjoyed worldwide success with his solo album, Flickr. A gig from The Coronas in July took in €424,416 at the box office.

Two of the most lucrative nights at the 3Arena last year were delivered by Italian singer, Andrea Bocelli, who generated sales of over €1.1 million for each performance.

In total, the box office for the two Bocelli gigs last October came to €2.264 million.

In July, Madness’s concert earned €298,098 while Boy George generated €251,027 at the box office for his concert at the 3Arena last November.

Comedians were also a big hit at 3Arena in 2018 with Michael McIntyre generating €1.8 million from four gigs, while Scottish comedian, Kevin Bridges’s three gigs earned a total of €891,034.

The Childline charity gig in December, where Hozier performed, took in just under €500,000 at the box office.