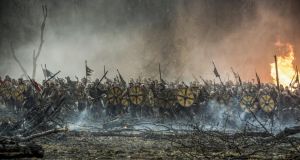 The fifth series of the television drama “Vikings”, which was shot at Ashford Studios. Photograph: Jonathan Hession

Planning permission has been granted for a €90 million extension to the Co Wicklow studios where the hit series, ‘Vikings’ was shot.

The plan by Ashford Studios has the potential to create 1,500 movie related jobs. It includes four new film studios of 40,000 sq ft each, a TV studio, offices and support space.

A spokesman for Ashford Studios said on Wednesday that the 10-year planning permission from An Bord Pleanála represents “a huge game changer” for the business.

“This gives us critical mass. It is very exciting. Phase One has shown what can be done with Vikings so we are batting from a very good crease,” he said.

The studios, which are led by Joe O’Connell and his daughter, Shelley, will have the capacity to shoot multiple major productions at the same time under the plan, the spokesman said..

“If you don’t build the infrastructure, you won’t get the productions. You have to take a leap of faith and be brave.”

He said that the studios have had many inquiries from production firms about shooting there over the past number of years but have been operating at full capacity with the Vikings series. “Now we can market the studios to more than one production going forward.”

Ashford Studios is part of the Universal Innovations Group (UIGroup), which employ 300 people here and in China where it operates a plant that produces home appliances.

The spokesman said the new studios will be funded by the group.

Wicklow County Council gave the proposal the go-ahead in March of last year after disregarding the recommendation of the case planner to refuse planning permission. The decision was appealed to An Bord Pleanála by local residents, Emily Olive Hill and Sharon Hughes.

The appeals board has now given the plan the green light, finding that the proposal would not seriously injure the visual amenity of the area or the residential amenity of property in the vicinity.

Ashford Studios Ltd recorded profits of €2.1 million in 2017 according to the most recently filed accounts.