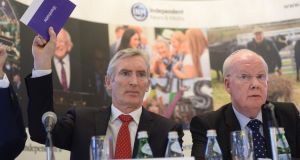 The €145 million proposed takeover of Independent News and Media (INM) by Belgian group Mediahuis was a tale of two meetings.

At 11am, existing INM shareholders gathered at the five-star Westbury hotel for the troubled media company’s annual general meeting (agm), with speakers from the floor excoriating its board for accepting the “buttons” offer. INM’s directors glumly took the hits.

Two hours later, INM’s would-be new shareholders hosted a media briefing across the city at another five-star hotel, the Merrion. The mood there, at least as from the hosts, was markedly different.

Net of cash, INM will cost Mediahuis less than €64 million. This for a publisher that made a profit last year of €24 million.

Thomas Leysen, the Belgian bidder’s chairman, and Gert Ysebaert, its chief executive, looked ready to break out into a duet, such was their barely-concealed satisfaction at picking up INM for a song.

When the proposed 10.5 cents per share deal was announced at 7am on Tuesday before markets opened, it looked far from a sure thing at first glance.

It was suggested that the bargain-basement deal already had the imprimatur of INM’s largest shareholders, Denis O’Brien and Dermot Desmond, who between them control 45 per cent; the missive referred to “unanimous” endorsement by INM’s board, which would include O’Brien’s nominee, Kevin Mulvey and Desmond’s ally, John Bateson.

Yet, Leysen still had just 1 per cent of its stock and it would cost INM only a €1.4 million break fee to walk away if a better bid emerged. There was still a sense among some other investors that the Mediahuis announcement could be the beginning of a process, rather than the end of one.

Within the hour, the official blessing of the two main shareholders came in the form of irrevocable undertakings to accept the Mediahuis bid. Then, at 11.30am, a telling blow was delivered to those who hoped for a higher offer: Mediahuis announced it was buying 26 per cent of the company from O’Brien and Desmond.

The Belgians now have a blocking stake. Not only will any other competing bidder – if indeed there ever was the real prospect of one – have to do a deal with INM, Desmond and O’Brien; they will also have to deal with Mediahuis.

As they faced the media at the Merrion, Leysen and Ysebaert gave no hint that Mediahuis is a stake flipper ready to turn a quick buck at INM.

About 80 per cent of their company’s revenues come from newspaper publishing in the Netherlands, where it owns titles including De Telegraaf, and in Belgium, where its newspapers include De Standaard.

A successful bid for INM would be a landmark for the Mediahuis group. Its revenues last year were €819 million. At INM, revenues were €191 million. Add the two together, and you have a €1 billion pan-European newspaper publisher.

But in a shattered newspaper market, where print sales are in freefall, the biggest challenge facing INM is how does it get readers to pay for its online content. For this stark question, Mediahuis believes it is the answer. Leysen produced graphs showing how it had improved print and digital “paid relations” at De Standaard and NRC Handelsblad, the Dutch paper of record.

If it gets its INM deal over the line, Mediahuis will be under pressure to complete the same feat in this market.