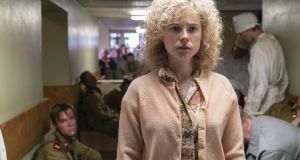 Chernobyl drama: Irish actor Jessie Buckley portrays Lyudmilla Ignatenko, whose husband Vasily was one of the first firefighters on the scene of the 1986 disaster

A new five-part miniseries dramatising the 1986 Chernobyl nuclear explosion will bring “fresh eyes” to the disaster and its subsequent cover-up, Chernobyl activist Adi Roche said at a screening of the drama in Dublin on Tuesday.

Ms Roche said she hoped the series, named Chernobyl and made by Sky in association with US broadcaster HBO, “wins every award going” for its portrayal of the tragedy and those caught up in it.

The English-language drama, which has an international cast including Irish actor Jessie Buckley, will air from next Tuesday, May 7th, on the Sky subscriber-only channel Sky Atlantic and on Sky-owned streaming service Now TV.

The production was shown at the UN in New York last Friday on what was the 33rd anniversary of the disaster. Ambassadors present were “actually crying as they were watching the series”, Ms Roche said. “It doesn’t shy away from telling it how it was.”

Ms Roche, the founder and chief executive of Chernobyl Children International, is campaigning for thousands of first-responders to the disaster, known as “liquidators”, to be collectively awarded the Nobel Peace Prize for their efforts to contain the deadly effects of the explosion.

The explosion at the Chernobyl nuclear power plant in Ukraine, then part of the Soviet Union, released radioactive material across Belarus, Russia and Ukraine and as far as Scandinavia and western Europe.

More than 300,000 men were conscripted and sent to the contaminated zone, including 3,828 men termed “bio-robots”, who were sent to the roof of the power plant to remove debris after the circuitry of remote-controlled robots failed due to the intensely high levels of radiation.

The Soviet government kept no official record of the fatalities and their sacrifice has been “airbrushed out of history”, Ms Roche said.

Sky Ireland managing director JD Buckley said Chernobyl was “a very significant series for us”, as it is Comcast-owned Sky’s first co-production with its “partners and good friends at HBO” arising from a $250 million deal agreed between the two broadcasters in 2017.

Buckley plays Lyudmilla Ignatenko, a resident of the now-abandoned nearby city of Pripyat, whose husband Vasily was one of the first firefighters on the scene of what they were told was a simple roof fire at the power plant. Ms Roche helped her prepare for the role.

The series, which was filmed on location in Vilnius, Lithuania, was written by Craig Mazin, directed by Johan Renck and produced by the companies Sister Pictures and Mighty Mint as a HBO/Sky co-production.

The cast is led by Mad Men actor Jared Harris as Valery Legasov, a leading Soviet nuclear physicist who was one of the first to grasp the scope of the disaster. Stellan Skarsgard and Emily Watson also star, while another Irish actor, Barry Keoghan, is part of an ensemble that includes Paul Ritter, Adrian Rawlins and Con O’Neill.

The series is “not for the faint-hearted”, Ms Roche said.