Mediahuis is one of Europe’s fastest growing media groups 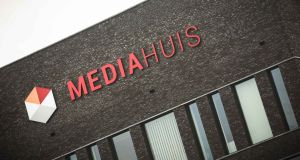 The Mediahuis headquarters in Antwerp, Belgium. The group employs 3,200 staff, and last year generated a turnover of €819m

Mediahuis, which has agreed to take over Independent News & Media (INM) for €146.5 million, is one of Europe’s fastest growing media groups.

It was set up in 2013 as a joint venture by long-established Belgian publishing houses Corelio and Concentra. In a relatively short time the Antwerp-headquartered firm has built up a significant portfolio of publishing and broadcast media assets, principally in Belgium and the Netherlands.

Mediahuis also operates several significant classified ad platforms in Belgium and the Netherlands, the best-known of which are Jobat, Jellow, Zimmo and Vroom.

It is also active in the Belgian radio market through the recently launched radio station NRJ and the Nostalgie radio station, which has a daily audience of 430,000 listeners in the Flemmish part of Belgium and is also the market leader in the French-speaking part of Belgium. Mediahuis also operates a series of regional TV channels.

He is also chairman of Brussels-based Umicore, a materials technology group that makes battery materials and automotive catalysts.

Mr Leysen’s family ventured into the media business when is father bought a bankrupt Belgian newspaper company 45 years ago.

Mediahuis said it is committed to accelerating the digitalisation of its news brands without compromising the print editions, and has successfully implemented pay walls and digital subscription services across its news sites.

On the move to acquire INM, Gert Ysebaert, chief executive of Mediahuis, said: “We believe that there is a clear rationale for the acquisition, and that INM will thrive under Mediahuis’ ownership.

“Furthermore, Mediahuis can contribute the relevant experience, skills and resources to invest in INM’s brands and significantly enhance its operational and digital capabilities.

“Underpinned by our unreserved belief in independent and quality journalism, we are optimistic about the combination of Mediahuis and INM, and its potential contribution to the Irish media landscape.”