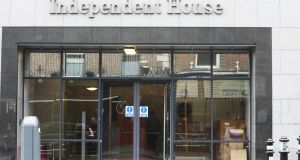 Beef baron Larry Goodman is poised to make a 35 per cent profit on a stake built up in Independent News & Media (INM), leaving him alone among three Irish billionaire investors in the group to make a clear gain as it is set to be taken over by a Belgian company.

INM announced on Tuesday, before stock markets opened, that it had agreed to be bought by Mediahuis, a company that owns newspapers in Belgium and the Netherlands, for €146.5 million. It came less than four weeks after the media company confirmed, on foot of a report in The Irish Times, that it was in takeover talks.

Mr Goodman owns about 2.14 per cent of INM through an investment vehicle called Vevan, having accumulated shares between last May and the end of March, when the shares were trading at an average price of 7.8 cent each.

Telecoms mogul Denis O’Brien, who is estimated to have spent more than €500 million building up a 29.9 per cent holding in the media group between January 2006 and the end of 2013, is set to receive €43.5 million as the Belgian group completes the deal, crystallising a loss running into hundreds of millions of euro.

Financier Dermot Desmond will receive €21.8 million from the transaction, roughly recovering what his 15 per cent cost him to amass between 2011 and 2013, according to figures gleaned from stock exchange filings and market sources’ estimates.

Spokesmen for Mr Goodman and Mr O’Brien declined to comment, while representatives of Mr Desmond’s IIU investment firm didn’t respond to a request for someone to comment on the transaction.

Mr O’Brien and Mr Desmond sold an initial combined 26 per cent stake in INM to Mediahuis on Tuesday, giving the Belgian company a massive boost as it seeks to complete the takeover in the coming months.