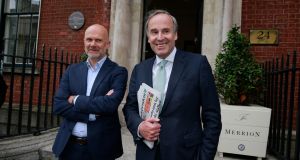 The Belgian company that has agreed a €145.6 million deal to buy Independent News & Media (INM) says the price, which was criticised as being too low by small INM shareholders at its annual general meeting (agm) on Tuesday, was affected by the data breach scandal that has mired INM in an investigation by High Court inspectors.

INM’s board recommended acceptance of a 10.5 cent per share offer for the group from Mediahuis, which owns newspapers in Belgium and the Netherlands. As INM has €81.7 million cash on its balance sheet, the bidder is effectively buying the largest Irish newspaper publisher for less than €64 million.

INM is currently the subject of a corporate governance investigation by the Office of the Director of Corporate Enforcement (ODCE) over a range of allegations made by its former management. The Central Bank is also examining ODCE concerns over possible insider trading at INM, while the State’s data watchdog is examining a major alleged data breach involving staff emails.

Thomas Leysen, the chairman of Mediahuis, who was in Dublin on Tuesday as the proposed deal was announced, confirmed that the sprawling State investigations into INM fed into the seemingly lowball offer.

“We did our homework on that [the State investigations],” said Mr Leysen. “We factored it fully into our decision making.”

He declined to comment on whether Mediahuis had agreed to assume all potential liabilities arising from the alleged data breach, which has exposed INM to potential lawsuits from those affected.

However, he agreed it was built into the price, implying that Mediahuis is likely to take the liabilities on: “Price is a part of decision making.”

INM announced the deal with Mediahuis before markets opened on Tuesday morning, hours ahead of its agm in Dublin.

At around noon, Mediahuis announced it had agreed a deal with Mr O’Brien and Mr Desmond to purchase 26 per cent of INM from their holdings. Together with a 1 per cent stake held by Mr Leysen, this makes the Belgian bidder the largest shareholder and gives it an effective blocking stake against competing bids.

The 10.5 cent per share price was lambasted by smaller shareholders at the agm in Dublin’s Westbury hotel. INM investor Donald Pratt, whose family previously owned the Avoca Handweavers group, said it was “crazy” for the board to recommend an offer that is a little over two times INM’s annual earnings.

“You’re giving the bloody company away,” Mr Pratt told the board, to applause from other shareholders.

INM chairman Murdoch MacLennan responded to the criticisms by saying it was the only bid INM had received and, at a 44 per cent premium to its share price last month, it was “the best deal for shareholders”.

Shareholders will be sent full details of the proposed deal within four weeks. It will then be put to a vote of shareholders at an extraordinary general meeting, before approval is sought from the High Court via a scheme of arrangement.

The deal needs 75 per cent support to be carried. It also needs clearance from the Competition and Consumer Protection Commission, which is likely to be a formality given Mediahuis has no existing Irish assets.

It also needs a green light from Richard Bruton, the Minister for Communications, who has the final say on all media mergers in the State.

1 Revolut losses tripled before Covid-19, despite rise in users
2 Stripe lures Dhivya Suryadevara from General Motors to be CFO
3 ‘No demand... because there are no people’ at well-known Dublin pub
4 Revised help-to-buy scheme opens for applications
5 Divorce: What will it cost and can you afford it?
6 Transferring the family farm without a tax headache
7 Nearly 30,000 could lose pandemic payment if they do not confirm eligibility
8 Post-Covid television starts to shape up – but with missing pieces
9 Management of Irish PR group Drury acquire agency from Omnicom
10 CityJet exits examinership after High Court ruling
Real news has value SUBSCRIBE